Stay Away from my Honey!

"Stay Away from my Honey!" is the first segment of the thirty-fifth episode of Season 3 of The Lion King's Timon & Pumbaa. It aired on August 27, 1999, alongside "Sitting Pretty Awful".

"Timon and Pumbaa fall for the same woman, but Smolder the Bear is also in love with her!"[1]

While Timon and Pumbaa are having larvae lemonade at a lounge's swimming pool, they meet a woman named Leslie Lambeau, who is the world's most famous supermodel and spokesperson. Pumbaa tells her that he has seen her commercials.

When Timon falls in love with Leslie, Smolder shows up and angrily tells the meerkat to stay away from "his honey," as he also has a crush on Leslie. Leslie tells Timon and Pumbaa that Smolder is not her boyfriend and that he thinks she likes him just because she said "hello" to him earlier. When she leaves, Pumbaa starts to fall in love with her, but Timon tells him that she is not right for him as they are two different species and Smolder would threaten him if he sees that he also wants her love. He therefore tells Pumbaa to stay away from Leslie.

Later, Timon and Pumbaa place ice cubes in a bucket from a vending machine for their larvae lemonade. After they do so, they run into Leslie again. While Pumbaa becomes very attracted with the woman, Timon tries to remind Pumbaa about Smolder. Leslie then invites Pumbaa to dinner and when she leaves, Smolder shows up, causing Timon to hide in the bucket of ice cubes. Smolder asks Pumbaa where Timon is, to which Pumbaa replies that he said that Leslie is a "dangerous dog." He then tells the bear that Leslie is at dinner, awaiting her true love, making Smolder decide to join them, hoping not to disappoint the woman.

Timon sees Pumbaa having dinner with Smolder and Leslie. He goes under the table to get Pumbaa's attention, but when he taps on Pumbaa's foot, the warthog thinks it is Leslie touching it. He accidentally kicks Timon and the meerkat hits Smolder's foot, making the bear also believe it was Leslie and ends up scratching Timon's back with his foot claws.

Pumbaa is now in his suite, plucking flowers. After doing so, he goes to tell Leslie his feelings for her. Leslie tells Pumbaa that she likes him but not in a romantic way since she is human and Pumbaa's a warthog. Smolder then shows up to force Pumbaa to stay away from Leslie. Leslie then confronts Smolder by telling him that she is not his girlfriend and that she just likes the two animals as friends. Pumbaa feels disappointed but decides to leave Leslie's room while he still has some dignity, with Smolder following him.

When Timon sees Smolder following Pumbaa, he thinks that the bear is going to kill his friend. He quickly goes to Smolder to tell him that Pumbaa didn't mean to fall in love with Leslie and he then believes that he will kill both of them. However, Smolder starts to cry, heartbroken by what just happened between himself and Leslie. His tears create a big flood, breaking the lounge apart. After the three are swept outside, Pumbaa tells Smolder that he was once in love with a beautiful warthog, but he got laryngitis and was unable to tell her how he felt, and that she moved away. Timon then tells them that he was in love with the same warthog who had told him that she loved Pumbaa and not him. Pumbaa then gets angry at Timon for not telling him so, and the two start fighting.

Smolder breaks up their fight and consoles the two by telling them that they still have each other, and the three all feel better and are about to go get something to eat together, with Smolder now thinking of Timon and Pumbaa as his new friends. 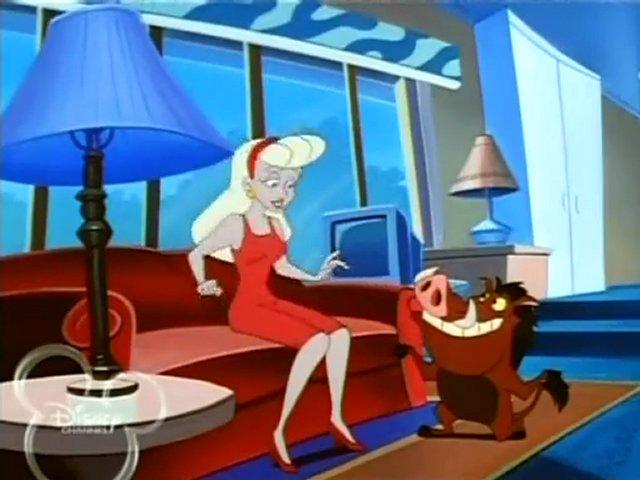