"South Sea Sick" is the second segment of the third episode of Season 1 of The Lion King's Timon & Pumbaa. It is the first episode of Season 1 to air on the CBS Saturday morning lineup. It aired on September 16, 1995, along with "Brazil Nuts" and "The Lion Sleeps Tonight".

After Timon and Pumbaa enjoyed a feast, Timon notices that Pumbaa looks ill with a green color in his skin, making him believe that his friend might be sick. Pumbaa says he has never been sick in his life and that it is probably due to a bad bug.

Timon refers to the book "Bugs We Have Dined upon That Have Made Us Not Look So Good" to see if Pumbaa had digested any of them. As the meerkat mentions each bug, Pumbaa feels worse and changes color. The warthog admits that he thinks he might actually be sick. Timon is excited to get to help his pal feel better, thereby repaying his debt to Pumbaa for many years of bestest best friendship.

Timon rigs up a contraption to cure Pumbaa, who thinks he might only need to burp. As he examines the warthog, Timon ends up causing even more bodily harm to Pumbaa. After all of the tests, Timon only determines that his friend is sick. Pumbaa suggests that he might need a real doctor but Timon reasons that, since everyone is scared of real doctors, Pumbaa will not be scared of Timon who is not a real physician.

Timon then refers to a book that he thinks is about miracle cures. As he's twisting Pumbaa's snout round and round, Pumbaa recommends checking the title of the book. Timon follows the recommendation, and, after seeing that it's about modern ship building, he goes and gets the book he was actually looking for.

When Timon rushes off to gather ingredients (such as poisonous berries), Pumbaa releases a large, loud burp and feels much better.

Timon returns with all of the ingredients for the cure-all. Because Timon tells Pumbaa how happy he is to finally get to cure his friend, Pumbaa does not have the heart to tell Timon that he is not feeling bad any more. After a horrifying taste of the cure-all, Timon believes Pumbaa feels better and plans to eat some bugs after all the work. However, the cure-all actually makes Pumbaa feel even more sick and hiccup nasty green bubbles. 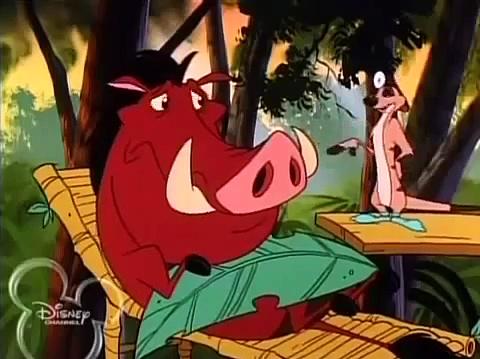 Retrieved from "https://lionking.fandom.com/wiki/South_Sea_Sick?oldid=296538"
Community content is available under CC-BY-SA unless otherwise noted.