Snakes are reptiles that inhabit the Pride Lands.

Ralph and Eddie are two carnivorous snakes who make their first and only appearances in this episode. The snakes build an All-you-can-eat Bug Buffet in order to trap Timon and Pumbaa so that they could eat them. After Timon and Pumbaa realize that it was a trap, they build a fast food establishment called "Carnivore King". When they make Ralph and Eddie enter the restaurant, the snakes realize that it's actually a cliff that will make them fall and land in the piranha river, where they get chased by a giant piranha.

"Once Upon a Timon"

The king cobra is another notable snake in the series. When Timon leaves his guard post to prepare for his date with Tatiana, the cobra enters the meerkat colony and kidnaps the princess, which caused Timon to get banished from his colony. After Timon meets Pumbaa for the first time, the two see that Tatiana is still alive but stuck with the cobra. The two rescue Tatiana and defeat the snake.

Five pythons appear below Pride Rock, where they hiss and throw themselves at Kovu, whom other animals are singing "One of Us" to, to show him that he is no longer welcome in the Pride Lands. He manages to bypass them and continues his escape.

Taka attempts to kill Mufasa using a cobra, but Rafiki manages to calm the snake. Rafiki continuously thinks back to the cobra, fueling his distrust of Taka.

A Snake in the Grass

A giant python named Joka attempts to split apart Timon, Pumbaa, and Simba in order to get Timon alone. His plan is eventually foiled, and he is thrown down a ravine by Simba and never heard from again. 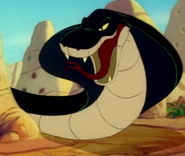 Kion leaps over Ushari
Add a photo to this gallery
Retrieved from "https://lionking.fandom.com/wiki/Snakes?oldid=222926"
Community content is available under CC-BY-SA unless otherwise noted.