"Slalom Problem" is the second segment of the eighth episode of Season 3 of The Lion King's Timon & Pumbaa. It aired on February 19, 1999, alongside "Throw Your Hog in the Ring".

"Timon and Pumbaa pretend to be skiing instructors to earn money for a bug dinner."[1]

Timon and Pumbaa are walking in the snow, freezing and starving. The two then come across a restaurant where they make bugs. But when they enter, they get kicked out since they don't have any money. Timon then sees a sign about skiing instructors, saying that they make money. This gives the meerkat an idea, which is to pretend to be skiing instructors.

Pumbaa, however, tells Timon that they can't be skiing instructors since they don't know how to ski, but Timon says that no one will know as long as they have skis, sticks, a mountain, and gravity. The two run into a grizzly bear named Smolder. He tells Timon and Pumbaa that he wants to learn how to ski so that he does not fall down in the snow and when that happens, he gets so angry that he does something despicable. While the bear prepares to ski, Pumbaa sneezes and it causes to move backwards and push Smolder down the mountain. Timon and Pumbaa now try various ways to prevent Smolder from falling and as they progress, Pumbaa tries to convince Timon to tell the bear that they don't really know how to ski, but the meerkat persists on taking advantage of his mistake.

When Smolder makes it down the mountain unharmed, he decides to have Timon and Pumbaa teach him more lessons about skiing. Pumbaa insists on telling the bear the truth, but Timon instead tells him that he graduated and became a natural skier.

Now that Timon and Pumbaa made money, they are about to reenter the restaurant, with Pumbaa still having doubts about what happened with Smolder. But then, Smolder takes Timon and Pumbaa to go to the Pro-slope with him as he believes that they did a good job teaching him how to ski. While they are on their way, a man asks the three for lift tickets and since Timon and Pumbaa don't have the tickets, he takes their money, with Pumbaa telling Timon that he should have listened to him about telling Smolder the truth.

Timon, Pumbaa, and Smolder are now at the top of the slope, with Smolder warning the duo that if he hits anything on his way down, they will be in trouble. When the three ski down the slope, Timon and Pumbaa accidentally covers Smolder's eyes with his ski hat, causing him to not see anything. Timon and Pumbaa see various obstacles in Smolder's way and quickly remove them before Smolder runs into them.

Smolder then gets caught on fire, causing his skis to burn down. Seeing what just happened, Timon tells Pumbaa that they need to give the bear more skis before he wipes out. Smolder then falls off the edge of the mountain and lands on the duo. When they get down the mountain, Smolder decides to ski on the Super Pro-slope. Eventually, Timon confesses to the bear by telling him that he and Pumbaa don't really know how to skis and are therefore not really skiing instructors. Instead of hurting the duo, Smolder decides to teach them how to ski, causing Timon to glare at Pumbaa for making him tell the truth. 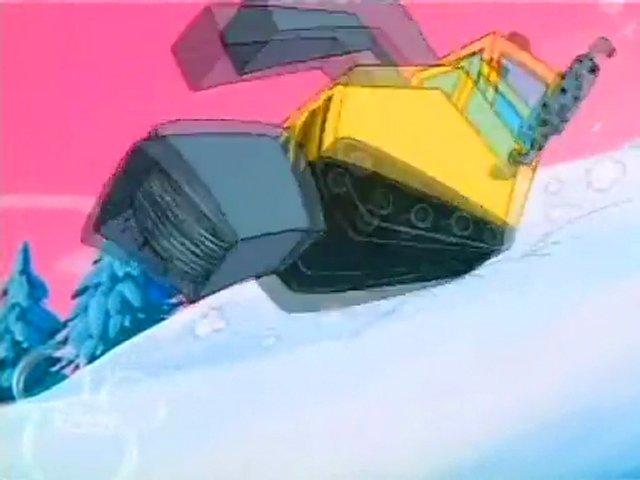