"Sitting Pretty Awful" is the second segment of the thirty-fifth episode of Season 3 of The Lion King's Timon & Pumbaa. It aired on August 27, 1999, alongside "Stay Away from my Honey!".

"Timon and Pumbaa are hired to babysit triplets."[1]

While a woman and her husband prepare to go out, the man is impressed by his wife managing to find a babysitter at the last minute, to which she replies that she did have to scrape the bottom of the barrel. It's revealed that the wife hired Timon and Pumbaa to babysit the baby triplets. When the parents leave, Timon watches TV but Pumbaa interrupts, telling his friend that they don't know anything about babysitting, which Timon replies that they do. Pumbaa then reveals to Timon that the babies are not in their bed and Timon quickly saves the triplets from getting hurt.

The babies are now sitting on the couch with Timon and Pumbaa, with Pumbaa telling his friend that babysitting children requires love and patience. The babies then start crying, much to Timon's concern. Pumbaa tells the meerkat that they are probably hungry and Timon attempts to feed them a grub. Pumbaa tells Timon that babies eat formula and Timon tries to give them a bottle of milk, but the warthog says that it's too cold. When Timon heats the milk up, he realizes that it's too hot.

Later, the babies eventually drink their milk. They then start crying again and Pumbaa states that the reason they are doing so is that they need to be pat on the back in order to belch. When Timon makes one of the triplets burp, the baby accidentally vomits on the meerkat.

After Pumbaa cleans Timon's skin, the two realize that the triplets need to have their diapers changed and it is only up to Timon to do so since he's the one who has fingers. After Timon takes care of the diapers (while Pumbaa stands by innocently) and buries them, Pumbaa reads the babies a story. Timon tries to hypnotize the babies to make them sleep, but the babies start crying and Timon tries various ways to make them stop. When his attempts to make the triplets stop crying fail, the meerkat gives up, but then he trips on a skateboard and gets hurt, which makes the babies laugh. Timon decides to continue getting himself hurt to entertain the babies.

Timon and Pumbaa see that the triplets are now sleeping. After their hard work of babysitting, the two call their parents via payphones to thank them for raising them and tell them that they love them. 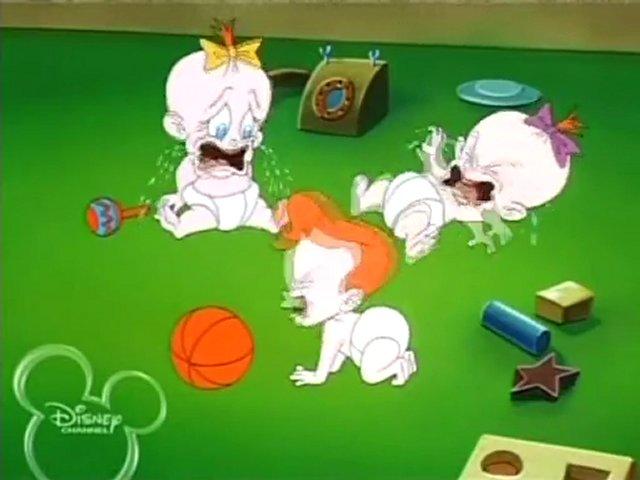