Simba's coronation is a ceremony in which Simba reclaims the Pride Lands from Scar and takes his rightful place in the Circle of Life.

After cornering Scar at the summit of Pride Rock, Simba confronts his uncle, initially ready to kill him and avenge Mufasa. Scar attempts to revert his nephew's anger away from him by accusing the hyenas of the coup and calling them "the real enemy," unaware that they are overhearing his lies. Although Simba refuses to believe Scar, he also refuses to kill his uncle and so instead exiles him from the Pride Lands.

Unwilling to accept this punishment, Scar hurls hot embers into Simba's eyes and attacks him. For a few seconds, Simba is down, but he quickly gets up and engages Scar in a brutal fight. A hard smack from Scar sends Simba on his back near the edge of the summit. Scar then jumps to deliver the final blow, but Simba defeats Scar by throwing him off Pride Rock. Scar lands at the base of Pride Rock and survives the fall, but the hyenas emerge from the flames and turn on him, revealing that they had overheard his attempt to betray them. More hyenas surround their former leader as he pleads for his life, but he is ignored. They proceed to attack, kill, and devour him alive as flames engulf Pride Rock.

After rain falls on the Pride Lands and extinguishes the fire, Simba walks down to greet Sarabi, Nala, Timon, Pumbaa, Zazu, and the rest of the pride. Rafiki rattles his stick to get Simba's attention and motions for him to ascend Pride Rock. Simba then walks over to Rafiki, and as Rafiki bows down to him, Simba embraces him before Rafiki tells him that it is time. Simba then climbs up Pride Rock, and as he reaches the promontory, he looks at the hole through the rain clouds to see a patch of stars, one of them shining brightly.

Upon hearing Mufasa's voice telling him to "remember," Simba gains courage, confidence, and strength, and roars out over his reclaimed kingdom, and the rest of the pride roars back in approval of their new king. Many years later, we see the Pride Lands restored and the presentation of Simba and Nala's newborn cub.

When Simba is attacked by hyenas in an attempt to chase Scar, Timon and Pumbaa insult and distract them, giving Simba some time to confront Scar above. While Simba is battling his uncle, Timon and Pumbaa keep the hyenas distracted, giving Ma and Uncle Max enough time to build a tunnel system to create a giant tunnel for the hyenas to fall into.

Although the trap fails and Pumbaa, Ma, and Uncle Max are nearly killed, Timon manages to break the last tunnel support, sending the hyenas crashing down the tunnel. At the same time, Simba defeats his uncle and throws him off Pride Rock. Uncle Max rejoices over the victory, but Ma goes into a panic attack, thinking that Timon died in the accident. Just then, Timon emerges from the hole, to his friends' joy, and he is claimed a hero.

After defeating the hyenas, Timon, Pumbaa, Ma, and Uncle Max gather to witness Simba climbing Pride Rock to formalize his title as king. Simba sees Timon and Pumbaa, who are watching him. They bow to him, and Simba hugs them, declaring that he wouldn't have been able to win without them. Then Simba ascends Pride Rock and, roaring, becomes the new king. Timon struggles not to cry in amazement as he watches Simba. Afterward, Ma asks Timon if he had found what he was looking for. He admits that he had found a place beyond his wildest dreams, but that it still was not home.

After Scar's defeat and death, the rains arrive, putting out the flames and ending the battle. Simba emerges from the smoke, victorious from his battle, and approaches his fellow pride members. After being marked by Rafiki, Simba ascends the peak of Pride Rock, where he hears his father's voice in the clouds telling him to "remember." With newfound strength, Simba roars across the Pride Lands, taking his place as the Lion King. Much later, all the animals return to Pride Rock under the reign of King Simba and Queen Nala for the presentation of their newborn cub, who is presented to the Pride Lands as the future ruler of the Pride Lands. 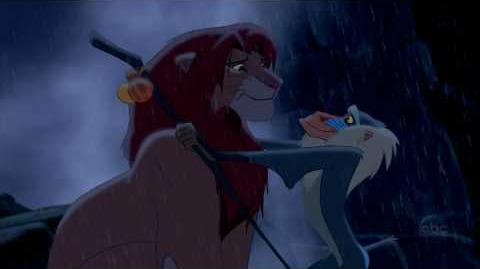