"Shopping Mauled" is first segment of the ninth episode of Season 2 of The Lion King's Timon & Pumbaa. It aired on October 5, 1996 on CBS' Saturday morning line-up, alongside "Library Brouhaha".

"Timon and Pumbaa are stuck in a mini-mall, trying to avoid their Antarctic nemesis, Irwin."[1]

While Timon and Pumbaa are sleeping, a construction vehicle turns part of the jungle into a shopping mall called the Hakuna Matata Megamall. Timon and Pumbaa accept the mall until they see Irwin, leading to Timon suggesting that he and Pumbaa get out of the mall. Pumbaa, however, tells Timon that Irwin is their friend, but the meerkat reminds his friend how accident-prone Irwin is.

When Pumbaa remembers the shuffleboard incident back at the titanic, the warthog agrees with Timon and suggests that they escape before Irwin sees them, which the penguin does and chases the two friends to ask them a question. Timon and Pumbaa try hiding in various stores at the mall, but they keep getting caught by Irwin. As the pursuit goes on, Pumbaa gets tired of running and suggests that he and Timon see what it is that Irwin wants to ask them. But Timon makes Pumbaa change his mind after making the warthog remember the shuffleboard incident. The two friends, therefore, continue running away from Irwin.

Timon and Pumbaa go to a pet store and Timon suggests that they pretend to be dogs, knowing that Irwin will not know the difference. But Pumbaa insists that they find out what Irwin wants to ask them, but Timon once again reminds the warthog about the shuffleboard incident. Pumbaa, therefore, goes along with Timon's idea. Irwin walks into the store and mistakes Timon and Pumbaa for actual dogs, asking them if they've seen the duo, which they reply they didn't and that they're ugly dogs. After Irwin leaves the store, a little girl appears and tells Timon and Pumbaa, whom she also believes are ugly dogs, that she will take them home and take care of them, but first they have to get their shots. After they got their shots, Timon and Pumbaa find themselves at an auto shop, where they are forced by the owner from a microphone to fix a car. After Timon and Pumbaa fix the car but accidentally make it rise and break the ceiling of the shopping mall, the two sneak out.

Timon finds a sign next to a restaurant and gets an idea to write "No Irwins" on a sign, knowing that it is a good chance to escape Irwin. However, the owner of the restaurant makes Timon and Pumbaa wait outside until a table is available. When Timon sees Irwin, he quickly tells the restaurant owner that he is a food critic and that Pumbaa is a visitors from Zebanesia who just wants to taste their food. Timon and Pumbaa are now at a table critiquing the chicken being served to them. Then the chef, who speaks Zebanese, warns the people about a gas leak and tries to get them to leave the building, but no one understands the chef and ask Pumbaa to translate the chef's words since they believe he's also Zebanesian. Pumbaa doesn't understand what the chef said either and therefore, makes up translations.

When the Hakuna Matata Megamall blows up, Timon and Pumbaa have an angry mob after them, with the Vulture Police showing up to have the duo arrested for causing trouble. When Timon and Pumbaa try to clear their names to the mob, no one seems to believe them, so the police suggest that they have someone vouch for them. Pumbaa suggests that they have Irwin help them and Timon reluctantly agrees. When the two friends try to get Irwin to vouch for them, the penguin instead reintroduces himself to them and asks them what he wanted to ask them before, which is if they've seen his car, which leads to the car falling on Timon and Pumbaa and the boat falling on the car. Pumbaa once again realizes that Timon was right about Irwin. 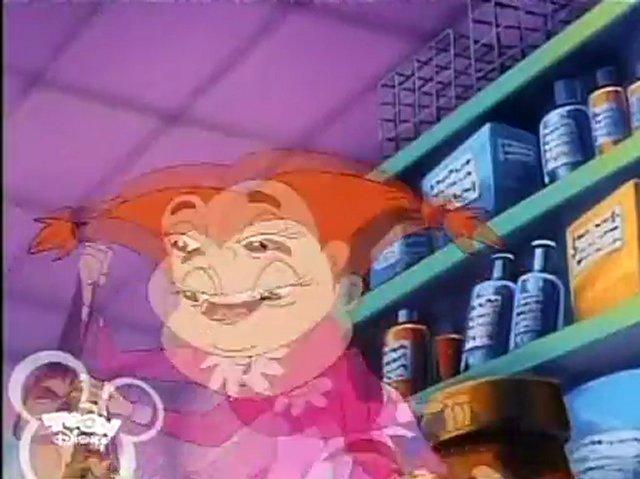