Shenzi's clan is a group of hyenas who lived in the Elephant Graveyard during the reign of Mufasa. They later became allied with Mufasa's brother Scar under the leadership of their matriarch, Shenzi.

The most prominent of the clan are Banzai, Ed, and Shenzi, the "friends" and allies of Scar. The three first appear in the Elephant Graveyard, trying to dispose of Simba and Nala when they wander into their territory, a plan later revealed to be orchestrated by Scar. When the hyenas fail due to Mufasa's intervention, Scar is furious but quickly forms another plan, promising the hyenas that when he becomes king, they will never go hungry again.

The hyenas then help Scar kill Mufasa via a wildebeest stampede and then chase Simba away from his father's dead body. They try to kill Simba under Scar's orders, but when he runs through a dense thorn thicket, they give up on the chase and decide to leave him to die in the desert, and only kill him if he returns to the kingdom. After the monarch and his heir are done away with, the hyenas infest the Pride Lands and become Scar's bodyguards and minions under his new reign.

Much later, as the Pride Lands have become barren, the hyenas start to become more hungry and complain to their king, but Scar simply ignores them.

When a young adult Simba returns from his self-exile from the Pride Lands to challenge his uncle, the hyenas reinforce Scar's position as king when Simba orders for Scar to step down. After Scar gets his nephew to confess his responsibility for Mufasa's death, the hyenas surround the two lions as they head toward the edge of Pride Rock, presumably protecting Scar.

After Simba gets Scar to confess that he killed Mufasa, a climactic battle between the Pride Landers and the hyenas breaks out amidst the flames of Pride Rock, resulting in several hyenas being killed in the flames or fleeing Pride Rock. In the midst of this, Simba chases Scar to the top of Pride Rock in the hopes of avenging his father's death. Scar, in an attempt to save his own life, tells an enraged Simba that the hyenas are "the real enemies," accusing them of plotting Mufasa's death and taking over the pride, which angers the hyenas, who overhear him. A brief duel erupts between the two lions, which ends with Simba emerging victorious and flipping his uncle over a cliff where Scar lands at the base of Pride Rock, among the defeated hyenas.

The hyenas, determined to get revenge on Scar, surround their fallen leader and turn on him. Scar continually pleads for his life, but the hyenas ignore him. The hyenas leap upon Scar and begin to devour him alive as they are all engulfed in flames. However, the former are confirmed to have made it out alive in the sequel, and are stated to have been exiled from the Pride Lands.

According to Nuka, the hyenas fled the Pride Lands after the battle, implying that at least some of the hyenas survived the battle of Pride Rock. However, the result of their exile from Pride Rock had left the Elephant Graveyard dormant of hyenas.

When Timon and Pumbaa venture into a different section of the Elephant Graveyard, they view Scar's hyena army singing "Be Prepared" while marching. Later on in the film, after Timon and Pumbaa perform their hula song to clear the way for Simba to confront Scar, some of the hyenas pursue them, only to flee after being gassed by Pumbaa's stench.

After Timon reunites with his mother and his uncle, Pumbaa notices the hyenas protecting Scar while Simba is dangling from the edge of Pride Rock. Timon coordinates a plan for Ma and Uncle Max to dig a tunnel to trap the hyenas while he and Pumbaa try to get the hyenas away from Simba.

When Simba goes after Scar, the hyenas follow him and try to prevent him from reaching Scar but are distracted by Timon and Pumbaa, who insult the hyena pack with offensive jokes. Ed stupidly laughs at them, causing Banzai to slap him. The hyenas then go after Timon and Pumbaa and manage to corner them in a cave of Pride Rock. Timon and Pumbaa try several tactics to stall them while Uncle Max and Ma dig a tunnel underneath them to make the hyenas fall off Pride Rock, but when the trap tunnel initially fails, the hyenas move in to kill Ma, Pumbaa, and Uncle Max. Unwilling to give up, Timon jumps down between Shenzi's legs and bravely completes the tunnel. The hyenas then fall through the ground and plummet to the bottom of Pride Rock, where they meet and confront Scar after he is thrown off a cliff by Simba.

Much like the original, the clan is led by Shenzi, the matriach. However, Banzai and Ed are renamed Kamari and Azizi, respectively, with some changes in their personality. Shenzi, in particular, is depicted as a ruthless matriach who is both feared and respected by all of her clan members.

The hyenas make their first appearance when Simba and Nala venture into the Elephant Graveyard. Shenzi and her clan quickly surround them and determine to make them their meals despite Zazu's warning that they will reignite a war with Mufasa. Only after Mufasa rescues Simba and Nala does Shenzi finally give up, as her clan is no match for Mufasa. She reluctantly lets the lions return to the Pride Lands.

That evening, they are visited by Scar, the younger brother of Mufasa, who offers an alliance. In exchange for help in killing Mufasa, Scar promises to allow the hyenas into the Pride Lands, where they can eat whatever they want. Shenzi agrees to the arrangement.

The hyenas cause a wildebeest stampede at the gorge under Scar's instruction. While Mufasa is killed as planned, Simba survives. The hyenas chase Simba until he and a hyena fall off a canyon. Shenzi orders Kamari and Azizi check that Simba is dead. Kamari, who is afraid of falling to his death, assures himself and Azizi that Simba could not have survived the fall, and they lie to Shenzi that they had eaten Simba. They are unaware that Simba is still alive, crouched below them on the lower reaches of the ridge. Later, once Scar is crowned king, Shenzi and her clan move into the Pride Lands.

During Scar's reign, the hyenas are in charge of hunting for the pride, acting directly under Scar's orders. Scar's poor leadership and the hyenas' unsatiable hunger leads the Pride Lands to suffer a severe famine, leaving the kingdom as nothing more but a barren wasteland.

In order to force Sarabi into becoming his queen, Scar creates a rule that the lions can only eat the leftovers of the hyenas' meal. During these times, Shenzi develops a rivalry with Nala, whom she had failed to eat when they had first met.

When a full-grown Simba returns and challenges Scar for the throne, the hyenas fight for Scar against Simba, the lionesses, and Simba's friends. In the battle, Shenzi fights Nala, but is defeated. Seeing Scar being chased by Simba to the top of Pride Rock, Shenzi chases after them with Kamari and Azizi. However, the hyenas overhear Scar's attempts to shift the blame on the hyenas. Angered by his betrayal, the hyenas leave Scar to fight Simba alone until the latter throws him off Pride Rock. Scar survives the fall, but is betrayed, attacked, and slaughtered by Shenzi and her soldiers. 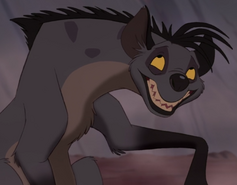 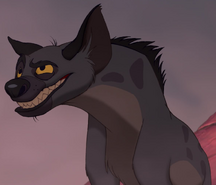 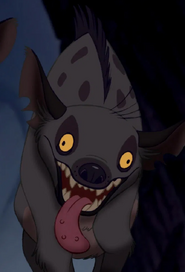