"Shake Your Djibouti" is the second segment of the twenty-third episode of Season 1 of The Lion King's Timon & Pumbaa. It is the twelfth episode of Season 1 to air on the CBS Saturday morning lineup. It aired on December 16, 1995, along with "Okay Bayou?".

"Timon and Pumbaa must boost Simba's shattered confidence and restore their bodyguard to full Lion status."[1]

At Dr. Happy's lab, Happy Dog realizes that a monster Happy created has escaped and tries to wake up his owner to let him know. Happy shows little concern about the monster's action, telling his dog that they will look for it the next day. The newspapers immediately pick up on the gravity of the situation and start to spread news about the disaster.

The scene cuts to Timon, Pumbaa, and Simba, who are sleeping. Upon hearing the news about the monster's escape from Dr. Happy's lab, Timon and Pumbaa start a training program in which they can get Simba to save them from predators. When their attempt to make Simba pounce fails, Timon scolds his lion friend, telling him that he's not ready to rescue him and Pumbaa from predators. But Simba tells the meerkat that he's confident and that he can handle any real predator. While Pumbaa believes Simba, Timon suggests that he should whip the lion into shape.

Timon and Pumbaa try three attempts to get Simba rescue them from a predator, with the first one being Simba sensing danger approaching, the second one being Simba using his fearsome roar to scare away predators, and the third one being Simba pouncing on predators. All three of these attempts, unfortunately, end in failure and Simba realizes that he's bad at being a lion. Wanting to instill confidence in their lion friend, Timon and Pumbaa plot to have Simba think he has saved them from the escaped beast. Timon, therefore, disguises Pumbaa as the predator.

When Timon finds Simba sleeping, the monster that escaped from Dr. Happy's lab, whose name is Bartholomew and who appears to be 40-foot tall, appears. At first, Timon mistakes Bartholomew for Pumbaa, but when Pumbaa shows up, he realizes he was wrong and the two try to get Simba to fight against Bartholomew.

As the battle between Simba and Bartholomew goes on, Timon and Pumbaa run to a tree branch, thinking that Bartholomew defeated Simba. Simba shows up unharmed, much to Timon and Pumbaa's happiness, as they think that Bartholomew is defeated and realize that Simba was all along confident enough to deal with any predator. Simba, however, reveals to them that Bartholomew is a friend and that he did not defeat him. He tells the duo that the monster has been lost and lonely ever since he escaped from Dr. Happy's lab and he suggests that they should let him into their Hakuna Matata club. Bartholomew admits that he has given the motto a lot of thought.

Once officially a member of their club, Bartholomew attempts to follow Timon, Pumbaa, and Simba across a log, but the trunk breaks beneath his weight, and all four friends slide backward into a ravine. 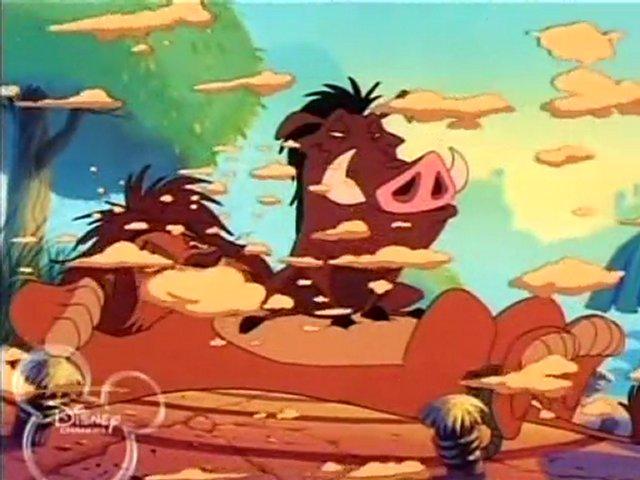 Retrieved from "https://lionking.fandom.com/wiki/Shake_Your_Djibouti?oldid=296564"
Community content is available under CC-BY-SA unless otherwise noted.