Scent of the South

During nighttime, Pumbaa passes gas inside a log, which Timon finds disgusting. Timon informs Pumbaa that he stinks and he decides to sleep outside, much to the warthog's sadness. When morning arises, Timon wakes up and finds Pumbaa missing. While Pumbaa walks away unhappy, thinking that he can't be Bestest Best friends with Timon anymore because of his smell, Miss Skunk Lady, a Southern skunk, stops Pumbaa to ask him about his smell. Pumbaa tells Miss Skunk Lady that he wants to get rid of it so Timon can be his friend again. Meanwhile, Timon is looking for Pumbaa but can't find him anywhere, which is until he finds Pumbaa with Miss Skunk Lady, believing that Pumbaa left him to find a new Bestest Best Friend.

Miss Skunk Lady explains to Pumbaa that she once had a similar situation as that of his, so she brings him to her own establishment used to extract odors. Miss Skunk Lady sprays Pumbaa with a giant perfume to make Pumbaa smell better. Meanwhile, when Timon complains about Pumbaa's new friendship with Miss Skunk Lady, he finds two stinkbugs, which makes him believe the reason Pumbaa left him for Miss Skunk Lady is due to her smell and that it means that he found someone who can understand his problem. Timon therefore eats the stinkbugs and rubs some over his body to make himself as smelly as possible.

Timon and Pumbaa meet each other and Timon makes Pumbaa smell his breath. Pumbaa thinks that it's his breath that stinks and leaves Timon. Pumbaa goes back to Miss Skunk Lady and she makes him drink a tea that makes his breath smell good. Meanwhile, Timon dives in a smelly mud puddle and covers himself with mud.

Then, Timon and Pumbaa meet each other again with Timon smelling bad. Pumbaa believes that he still stinks and leaves Timon again. Pumbaa goes back to Miss Skunk Lady, who puts the warthog through a deodorizer, which gives him a bath, brushes his teeth, and dries him up, while Timon is writing a letter to someone to give him a big smelly cheese.

Timon, with the big cheese on his head, and Pumbaa, now smelling much better, meet each other once again. This time, they confess to each other that they did what each of them were doing so that they can still be friends. After that, the two friends share a laugh and Timon accepts Pumbaa's new smell. Although Timon and Pumbaa reunite, Pumbaa realizes that Timon smells bad and sends him to Miss Skunk Lady, who puts Timon through the deodorizer. 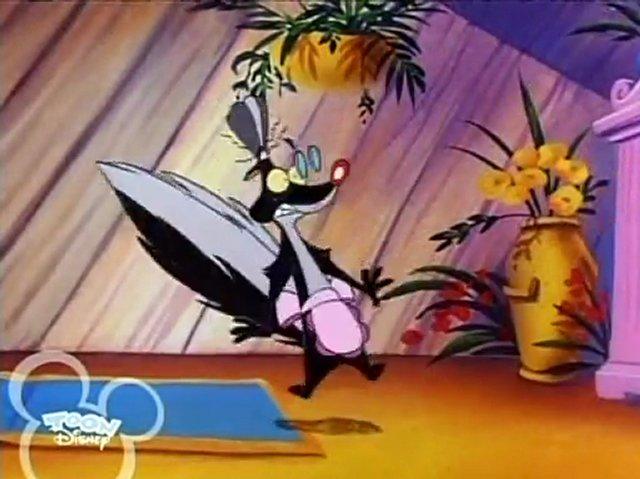