"Russia Hour" is the first segment of the seventh episode of Season 1 of The Lion King's Timon & Pumbaa. It is the third episode of Season 1 to air on the CBS Saturday morning lineup. It aired on September 30, 1995, along with "You Ghana Join the Club".

Timon and Pumbaa are going to visit Pumbaa's uncle Boaris. While they are on their way, Pumbaa tells Timon to behave, as he reminds him of their visit to Pumbaa's cousin Mildred. The warthog then tells Timon that Boaris is the greatest ballet dancer in all of Russia and that he wants to make a good impression with his uncle. Timon suggests that they could make a good impression by playing music and goes through their suitcase to look for an instrument, which he can't seem to find.

When the two get to Boaris' suite, Boaris opens the door and is glad to see Pumbaa. Boaris at first mistakes Timon for a muffler and stretches the meerkat until Pumbaa tells his uncle that the "muffler" is Timon. Boaris is pleasured about meeting Timon and he gives the two a painful hug. The warthogs hugging each other with Timon in the middle sends the meerkat to the kitchen. Timon sees a can of caviar, which he believes to be bug larva. He tastes the caviar and finds it very good, leading him to pour the rest of the can, as well as other cans into a bowl.

Boaris informs Pumbaa that his ballet shows are not as successful as they used to be, but he is planning on doing his final performance the next day during the night. Meanwhile, Timon sits on a couch eating the bowl of caviar. After Pumbaa mentions that caviar is fish eggs, Timon is disgusted and throws the bowl of caviar on the floor. As Boaris starts practicing his performance before the two friends, he slips on the caviar and lands on a pair of roller skates Timon left on the floor while looking for an instrument in his suitcase. The skates cause Boaris to fall down the stairs and get seriously hurt.

Timon, Pumbaa, and an injured Boaris are now at a hospital. Boaris says that his final performance is never going to happen until he gets an idea to make Pumbaa fill in for him, which Timon takes as his idea. But Pumbaa doubts that it is a good idea as he states that he can't dance, but then Boaris tells his nephew that "ballet is in his blood". Timon drags Pumbaa out of the hospital to practice dancing for the performance.

Timon and Pumbaa are at a ballet practice room, with Pumbaa wearing a tutu. Pumbaa starts dancing, but then runs into a piano. One hour later, Pumbaa practices dancing again but, along with Timon, falls on the floor and the two land on a checkers board that two men are playing. Then, Timon makes Pumbaa practice dancing one more time, but the meerkat obliviously ties the laces of each shoe together, which makes Pumbaa get hurt and break one of his legs. Timon worries that since Pumbaa is seriously injured, he would never become a star until he gets an idea.

Timon is stalling onstage at Swine Lake, playing an accordion and doing stand-up comedy, but no one at the audience is entertained. Suddenly, the audience cheers when Boaris, supposedly having fully recovered, appears onstage. When Boaris finishes his act (with help from Timon), the audience triumphantly praises the performance, with Timon and Pumbaa in amazement. When asked by Pumbaa how he recovered so fast, his uncle replies that he didn't, and his body cracks into pieces. It is unknown if he perishes or not. 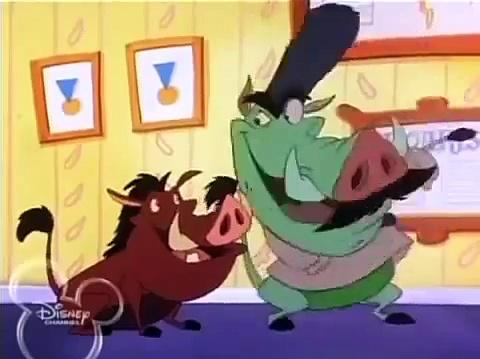 Retrieved from "https://lionking.fandom.com/wiki/Russia_Hour?oldid=296541"
Community content is available under CC-BY-SA unless otherwise noted.