Rumble in the Jungle

"Despite Rafiki's best efforts to stop an argument between Timon and Pumbaa, it turns into an all-out brawl anyway."[1]

Timon and Pumbaa are having a bitter argument. When the two get ready to fight, Rafiki quickly stops them. Timon believes that Rafiki is going to use magic to resolve their differences, but the baboon tells him that a fight can only be stopped by the participants themselves and then declares that he is going to show them how to do so.

Rafiki, Timon, and Pumbaa are at Rafiki's tree. Rafiki makes the two draw pictures of each other. When they're done, Rafiki looks at Pumbaa's drawing of Timon, which is really good. However, when Rafiki looks at Timon's drawing of Pumbaa, the drawing is crudely drawn and has insults of the warthog. Pumbaa gets angry about that and ruins his nice drawing by scribbling on Timon's face and writing "Kick Me" around it. Timon and Pumbaa then fight and Rafiki stops them by hitting them on the head with his stick.

For the second attempt on how to make Timon and Pumbaa resolve their differences, Rafiki makes the duo act like each other. When Timon has his turn on imitating Pumbaa, a crocodile appears and attacks the meerkat, while Pumbaa imitates Timon.

Next, Rafiki tries hypnosis, which is to have Timon and Pumbaa remember their happiest times together. However, this attempt fails as Timon and Pumbaa state that they hate each other, first in a childish way and then in a Shakespearean style.

Timon and Pumbaa are now fighting at a wrestling match, with Zazu hired as their judge. After all the rounds end in a tie, Timon and Pumbaa realize how hardworking and tiring fighting is. They then put their differences aside and become friends again, with Rafiki watching them in happiness, believing that his plan on making the duo fight it out worked. 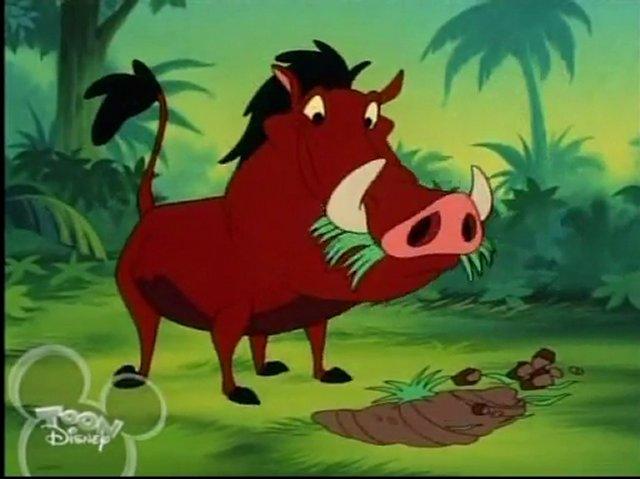