"Rome Alone" is the first segment of the eighteenth episode of Season 2 of The Lion King's Timon & Pumbaa. It aired on November 9, 1996 on CBS' Saturday morning line-up, alongside "Amusement Bark".

"Simba is kidnapped by the Roman Emperor for refusing to eat Timon and Pumbaa."[1]

Timon and Pumbaa are delivered to a stadium in Rome, Italy, with the duo under the belief that they're in Las Vegas. There the Emperor, Colosseum Quintious, orders that Timon and Pumbaa be fed to a lion, (which Pumbaa at first misinterprets to mean that they get to feed the lion.) Quickly realizing they're in trouble, Timon and Pumbaa try to escape the stadium. However, they are too late and the lion catches them both. Fortunately, the lion turns out to be none other than Simba, who refuses to eat Timon and Pumbaa since the three of them are friends (to Quint and the audience's anger.)

However just as Timon, Pumbaa, and Simba begin to leave the stadium, Quint stops them, demanding that Simba either eat Timon and Pumbaa, or fight Claudius, a gladiator lion who has never lost a fight. Unwilling to let Simba be hurt and let themselves be eaten, Timon devises a plan to have it seem like Simba ate Timon and Pumbaa in order to trick Quint. (Unknown to everyone else, Simba hides them in his mouth in order make a quick exit.) However, Timon and Pumbaa start to fight while inside Simba's mouth which makes Quint suspicious. Finally, Timon makes Pumbaa fart by accident and Simba is forced to spit them out in disgust. Exposed for tricking Quint, Timon, Pumbaa, and Simba make a hasty retreat and they manage to escape the stadium, with Quint in pursuit. After a long chase that culminates to both groups using chariots to escape one another, Pumbaa manages to leave Quint behind, leaving him, Timon, and Simba to try and find a way out of Rome. Shortly after running around however, Quint surprisingly captures Simba and prepares for him to fight Claudius to the death tomorrow.

Unable to free Simba from his imprisonment, Timon and Pumbaa devise a plan to make Claudius forfeit his fight with Simba instead. Later that night, while visiting the Lion's Den, Both Timon and Pumbaa come up with various ways to make their plan work, ranging from:

All of which end in failure. The next day, Simba and Claudius enter the Colosseum, prepared to fight each other. Suddenly just as both Lions prepare to fight, to everyone's surprise (and the audience's frustration,) Claudius falls asleep. It's then revealed that while Timon and Pumbaa couldn't get Claudius to agree to not fight Simba, their attempts to make him forfeit did keep him up all night, without any sleep.

Enraged that Claudius won't fight now, and that Simba still refuses to eat Timon or Pumbaa, Quint decides to fight the trio himself. After Timon, Pumbaa, and Simba mess around with his attempts to kill them, Quint accidentally hits and breaks one of the pillars holding up the Colosseum, which causes a Domino effect and causes the entire Colosseum to start falling apart with it. Timon, Pumbaa, and Simba manage to escape the Colosseum before it completely falls apart and Timon puts a sign on the ground that reads: "Beware of Fallen Empire!". 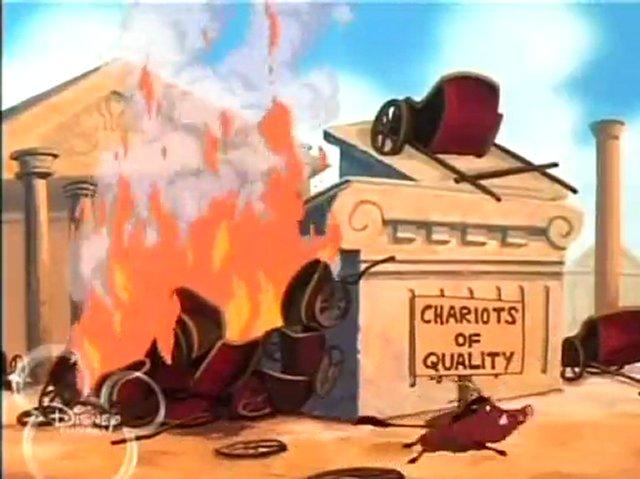