"Robin Hoodwinked" is the first segment of the thirteenth episode of Season 3 of The Lion King's Timon & Pumbaa. It aired on March 26, 1999, alongside "Serengeti Western".

"In order to reclaim god rocks from Claim-Jumper Quint, Timon becomes Robin Hood and Pumbaa acts as his merry man."[1]

Timon and Pumbaa find bugs in a ravine. The two dive into the ravine to catch the bugs but instead they find gold rocks, much to Timon's annoyance as it has been like this all day.

Suddenly, an arrow hits the gold and Claim-Jumper Quint, the King of Rottingham, shows up and plans to steal the rocks. Timon and Pumbaa insist that he keeps them until he makes the two change their minds by telling them that they can buy bugs with the gold. Timon and Pumbaa now want Quint to leave so they can have the gold, but Quint says that he now owns the forest.

Timon and Pumbaa try to find a way to stop Quint from stealing the gold and Timon suggests that he becomes Robin Hood and Pumbaa becomes his merry man, Little Hog. Timon and Pumbaa try various ways to stop Claim-Jumper Quint, but nothing works. After all the failed attempts, Timon and Pumbaa decide to disguise themselves as a woman. Quint finds Timon in a woman costume and falls for his and Pumbaa's trick as he believes it is an actual woman and becomes attracted to "her." While Timon talks to Quint, Pumbaa sneakily takes the bags of gold. The two then escape with the bags.

Timon and Claim-Jumper Quint have a competition where Quint wins the first round and Timon wins the second, resulting to the two contestants to have a tie. Quint then suggests that he and Timon have an archery contest. He ties up Pumbaa at the target with an apple on his head. Timon and Quint both succeed in shooting the apple, resulting in another tie. For a tiebreaker, Quint suggests that they flip a coin with Quint doing tales and Timon doing heads. Quint flips the coin and it lands on heads, therefore Quint wins.

Quint forces Timon to return him the bags of gold, but first he decides to look at what's behind curtain number 3, where it is revealed that there's nothing behind the curtain. Pumbaa pushes a rope that makes all the gold fall on the king. Timon shoots the arrows at Quint while Pumbaa is proud of his friend for his actions. 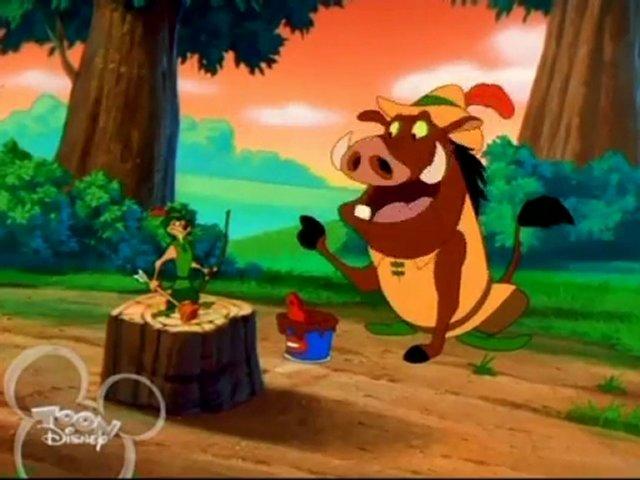