"Recipe for Disaster" is the first segment of the eighteenth episode of Season 3 of The Lion King's Timon & Pumbaa. It aired on April 30, 1999, alongside "Going Over-Boar'd".

"When their salsa recipe becomes famous, Pumbaa struggles to keep it a secret."[1]

While Timon looks for something to eat, Pumbaa suggests that they should eat salsa. Timon states that they don't have any recipes to make salsa, therefore, they decide to use bugs.

During the duo's break from making salsa, Pumbaa then tells a zebra, a gazelle, and a tiger some of Timon's secrets, much to the meerkat's anger. When Timon complains to Pumbaa about the warthog telling his secrets to others, Pumbaa tells him that he will try to do better with secrets. The two friends then go back to making their salsa.

After selling the animals their salsa and making money, Timon and Pumbaa get a call from someone who wants to interview them about their salsa. Timon then starts to entrust Pumbaa about exposing their secret recipe, begging him not to so otherwise they will lose their fame and fortune. Pumbaa starts to find it difficult to keep their recipe secret.

Timon and Pumbaa get on a plane to go to a talk show called Ropa Live. Pumbaa feels nervous that he and Timon are going to be on TV because he's afraid that he might expose the secret recipe. Timon tells the warthog that Ropa and her people promised not to ask them what their salsa is made of.

Timon and Pumbaa are now on Ropa Live. When Ropa takes a bite of their salsa, Pumbaa feels even more nervous and then reveals the secret recipe. Because of that, Timon and Pumbaa lose their fame and fortune.

Timon gets angry at Pumbaa for telling the secret recipe. Pumbaa feels guilty and tells Timon that keeping the secret recipe secret was not very easy. Timon then decides that Pumbaa trying his best counts and that they still got each other and their salsa. Pumbaa tells his friend that he hid the chips in his secret hiding place that no one else knows about. However, when Timon and Pumbaa get to Pumbaa's secret hiding place, they find the animals eating the chips, meaning that they do know about the hiding place. 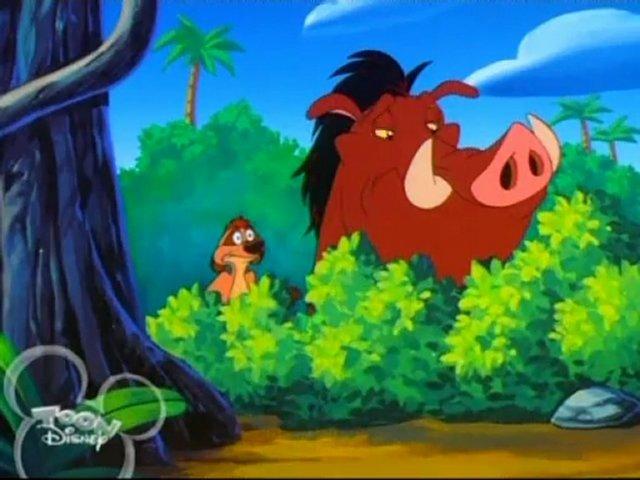