"Ready, Aim, Fire" is the second segment of the thirty-third episode of Season 3 of The Lion King's Timon & Pumbaa. It aired on August 13, 1999, alongside "The Spy's the Limit".

"Timon and Pumbaa aren't sure if they should put out a campfire for Smolder the Bear or relight it for Quint."[1]

Timon and Pumbaa are vacating in the north, where it is shown to be cold. Timon blames his friend for choosing to go ice fishing in the north for vacation. The two then see a campfire that is not being used, therefore going there to warm themselves up.

But then, Timon and Pumbaa come across Smolder, who tells them that people who use fire are known to be bad guys and tells them that he eats those people, revealing to them that he ate two children named Joey and Suzie for playing with fire (with Timon surprised about the bear having a door in his stomach). After Pumbaa turns off the fire, a French-like Quint, who is a lumberjack, appears with a fish he’s about to eat and forces the two to relight the fire. He shows Timon and Pumbaa that they can find fire from a nearby volcano.

While Timon and Pumbaa are on their way to relight the fire for Quint, they run into Smolder. Instead of telling the bear the truth, Timon makes up an excuse by telling him that he and Pumbaa use the fire for them to walk on hot coals. After Smolder makes Timon and Pumbaa walk on hot coals, he still doesn’t find it to be a good excuse and warns them once again about eating them if he ever catches them with another flame.

When Timon and Pumbaa run to the water due to their feet being hurt from the hot coals, they run into Quint again, who finds them without a fire. Timon tells the lumberjack that he and Pumbaa dropped it somewhere in the water. After Quint sends the duo back to the volcano, Pumbaa gets an idea.

Pumbaa makes Timon dress up like a fire to distract Smolder while he gives the real fire to Quint. When the warthog leaves, Smolder walks up to Timon, who tries to distract the bear. Smolder is then about to hit Timon with a shovel, making the meerkat run. The bear ends up hitting Pumbaa and is about to eat the warthog. In order to save his friend’s life, Timon paints a picture of fire on Smolder’s back so that the bear can panic while the two friends escape him. When they once again run into Quint without a fire, Timon is about to make up an excuse of why they don’t have the flame. However, Quint kicks Timon and Pumbaa back to the volcano.

While Quint roasts Timon and Pumbaa, Pumbaa asks Timon why he didn’t tell Smolder the truth in the first place, which the meerkat replies that it is sometimes easier to lie. Smolder then shows up angry at the duo. Timon and Pumbaa let Smolder know that Quint is the reason they were using fire, making the bear realize they they are not bad guys after all. 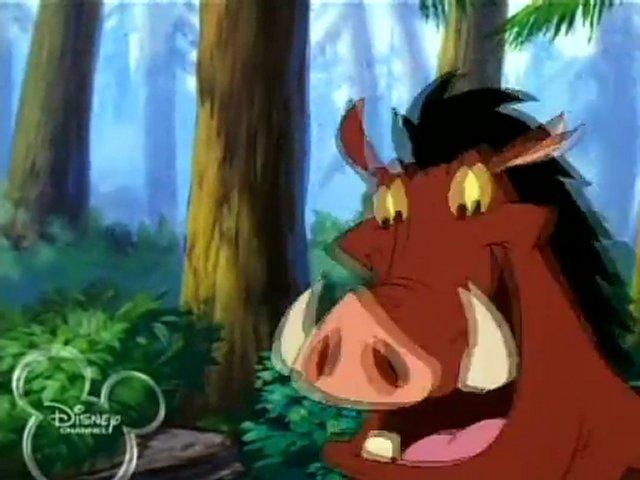