When Rafiki is about to take a nap, he runs into his nephew, Nefu. Nefu tells his uncle that his parents are at the fine country for a getaway weekend and that he wanted to stay with him instead of going with his parents. The young baboon then tells Rafiki that he wants to be a shaman just like him, with the older baboon teaching him how he draws on his tree and how he makes magic. Rafiki will show him how.

Rafiki and Nefu go to Rafiki's storage room, with Rafiki telling his nephew that he has to stack the shelves with his golden gourds, which are the key to his magical connection. He then takes Nefu to the gourd trees and makes him go back and fourth to pick up the gourds and place them in the shelves in the room without any help.

When Nefu goes in the room with few of the gourds, the gourds magically place themselves in the shelves. The young baboon believes that Rafiki tricked him into doing his chores and he decides to use Rafiki's stick to make the gourd trees come to life and place the gourds in the room for him. Later when the room is completely filled with gourds, one of the trees continues throwing more in the room, with Nefu trying to get it to stop.

The spell spirals out of control and causes many animals to be accidentally hit with magic spells as he tries to make the trees disappear, eventually ending up with breaking Rafiki's walking stick in two.

Nefu then runs into his uncle and the two baboons go back in the room. Rafiki sees that the room is now filled with gourds, but he becomes suspicious as he believes that Nefu had help, which the young baboon denies. The tree comes back to life and throws more gourds in the room. After Rafiki sees the tree, he wonders what happened to stick, explaining to Nefu that it was given to him from his grandfather and that one of his ancestors used it to save his people from a herd of angry ostriches by bridging a gorge. Nefu then confesses his action and says that he'll never mess with magic again. Rafiki then reveals that has a number of back up sticks in his possession and uses one of his additional sticks to reverse Nefu's original spell.

Rafiki sees that Nefu has learned what the consequences of using spells and magic without thinking about what can happen. He then forces his nephew to return the extra gourds back to the trees, offering him part of his old magic stick for him to use for help, but Nefu decides to do the chore on his own instead, which Rafiki replies that it is very wise of him. However, when the two baboons enter the storage room, Nefu accidentally changes the color of Rafiki's tree, showing that he still has a long way to go to reach his uncle's level in magic skills. 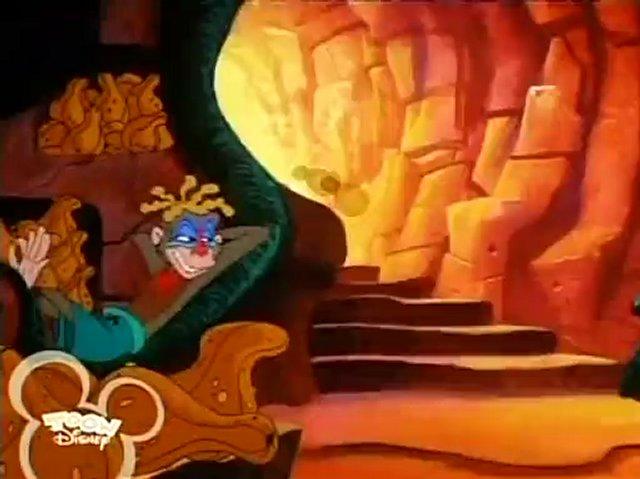 Retrieved from "https://lionking.fandom.com/wiki/Rafiki%27s_Apprentice?oldid=303450"
Community content is available under CC-BY-SA unless otherwise noted.