Puttin' on the Brits

"Puttin' on the Brits" is the second segment of the third episode of Season 2 of The Lion King's Timon & Pumbaa. It is the first episode of Season 2 to air on the CBS Saturday morning lineup. It aired on September 14, 1996, along with "Isle of Manhood".

"Timon and Pumbaa try to keep a cuddly little fox out of the clutches of an ace hunting hound."[1]

Timon rescues a baby fox from some foxhounds. After showing Pumbaa the fox, the two friends try to hide it somewhere. When they can't find a place to hide the fox, Pumbaa suggests that they should hide it in their suitcase. Timon and Pumbaa then act natural while the hounds and their owners pass by.

While Timon and Pumbaa are relieved by outsmarting the hounds, the two run into another foxhound, who believes that he is better at fox hunting than the other hounds. He begins to sniff around the hiding places Timon and Pumbaa were about to put the baby fox but didn't think they were good enough. When the found asks Timon and Pumbaa what's in their suitcase, the pals reply by saying that they don't see a suitcase and they flee with the case, with the hound chasing them.

Timon and Pumbaa enter the maze but they keep getting followed by the hound. They put various smelly objects around the maze to distract the hound while they try to escape. Timon sees that they can't find a way out, but Pumbaa tells him that while they entered the maze, he placed a yarn outside and pulled the string around with them so they don't get lost.

When Timon and Pumbaa exit the maze, they hear the hound saying that he's lost, making them happy to outwit him. But then, the dog finds his way out of the maze and finds Timon and Pumbaa. The pals flee and hide in a foggy area. As they are checking on the fox, delighted by how cute it is, the hound finds them and grabs the suitcase. But Timon hits him with the goggles he's currently wearing, making him let go of the suitcase so that the pals catch it and escape with it. Timon and Pumbaa then taunt the foxhound as he is looking for them in the fog.

Knowing that Timon and Pumbaa are out of food, water, and ammunition and cannot remain in the castle much longer, the hound asks them to surrender or he will continue to lay siege to the castle. Timon, however, claims that he can stay in the castle for a long time. The hound, therefore, decides to take up residence next to the castle while continuing to attack. Timon instantly gives up and reluctantly decides the give the fox to the hound, stating that the fox is not that cute, but when he opens the suitcase, he and Pumbaa see the fox trying to chase a butterfly, making Pumbaa state that he is that cute. Timon and Pumbaa then see that the hound is gone and find a big gift, which Timon believes is a tribute to his cleverness, but Pumbaa believes it's a trick.

The hound opens the suitcase and finds the fox, who shakes in fear. But then, it turns out that the fox and hound are actually playing a game of tag and the fox is actually an adult. Timon and Pumbaa are mad at the fox for taking advantage of them and as a payback, they decide to chase the fox themselves. 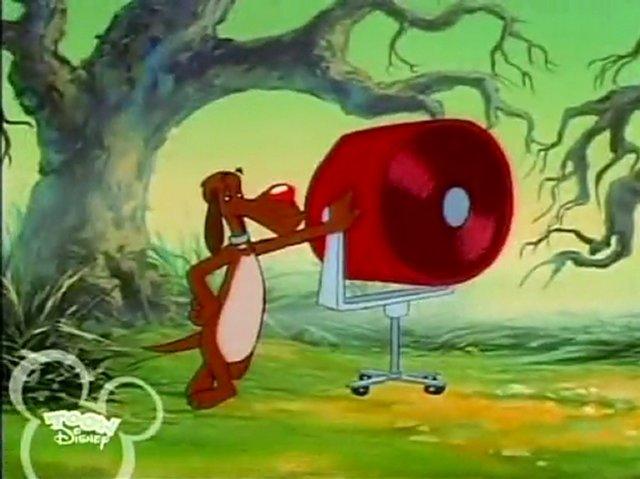