"Palm Beached" is the first segment of the first episode of Season 2 of The Lion King's Timon & Pumbaa. It aired on September 2, 1996, along with "Jamaica Mistake?".

"Timon and Pumbaa find themselves transplanted to the landscaped rooftop of a palm beach hotel."[1]

Pumbaa picks a palm tree as his and Timon's new napping spot, but Timon is suspicious about the spot because things go wrong every time Pumbaa picks one. Pumbaa convinces his friend that nothing will go wrong and the two take a nap. It is soon revealed that Timon and Pumbaa are at a tree farm. A helicopter flies by and picks up Timon and Pumbaa's napping tree, taking it to a posh hotel. Timon, having blamed Pumbaa for making the same mistake again, suggests that they make a hasty getaway before anything else goes wrong, only for the two to find the rooftop swimming pool. Timon and Pumbaa are about to nap in the pool, only to be stopped by hotel manager Concierge Quint, who grabs the two and throws them out of the hotel, as he won't accept animals as guests.

Pumbaa moans to Timon that the meerkat was right about him choosing a napping spot, but Timon tells the warthog that this time he chose the best napping spot and that they're going to sneak back in. Timon and Pumbaa hide in one of the suitcases Concierge Quint is pushing. But Pumbaa passes gas, which makes Quint open the suitcase and see the two. Quint chases Timon and Pumbaa up the stairs, but then runs into a person (Timon and Pumbaa in disguise). The person opens a door for Quint, telling him that Timon and Pumbaa went that way. Then, it turns out to be a door to an outside of the hotel, causing Quint falls down. Timon and Pumbaa take a nap in the pool, but Quint catches the two and throws them out again.

Timon sees a sign of a seminar going on and rearranges the words and puts a picture of Simba in the place of the picture of the man. Timon and Pumbaa enter the hotel, but Quint stops them. Timon tricks Quint by telling him that they're on a way to a seminar, making the manager let the two in until the Simba picture falls down. Realizing he just got tricked, Quint starts chasing Timon and Pumbaa, who get in an elevator. Quint goes from stairs to stairs to capture the duo, but they continuously outsmart him. Timon and Pumbaa are now napping on sun chairs, but Quint catches them and throws them out again.

Quint catches Timon and Pumbaa sitting at a table with drinks. Timon and Pumbaa tell him that they will keep coming back to the hotel no matter how many times he throws them out. Quint then gets an idea to make the pals want to leave the hotel once and for all, which is to treat them like real hotel guests. 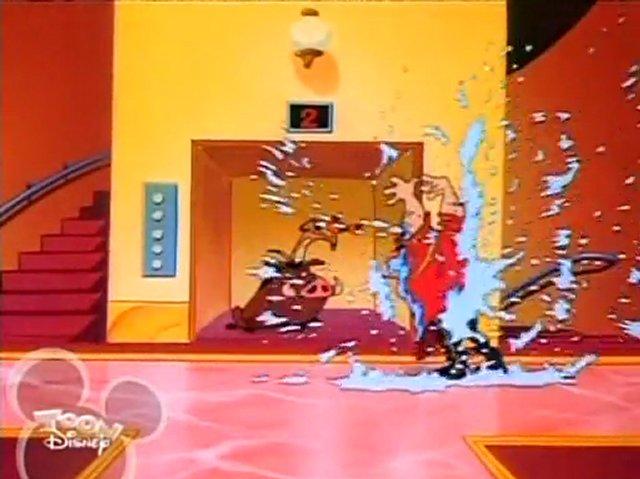 Retrieved from "https://lionking.fandom.com/wiki/Palm_Beached?oldid=296565"
Community content is available under CC-BY-SA unless otherwise noted.