The Outsiders are a pride of lions who live in the Outlands. They were banished from the Pride Lands by Simba due to their loyalty to the previous king, Scar. Later, they reconcile with the Pride Landers, after which they disband and reintegrate with Simba's pride.

When Kiara, the young daughter of Simba and Nala, expresses interest in roaming the Pride Lands, Simba warns her to stay away from the Outlands, where the Outsider pride dwells. Overhearing the conversation, Zazu flutters up to the king and warns Kiara that nothing inhabits the Outlands but a "bunch of backstabbing, murderous Outsiders." Simba then warns his daughter to never turn her back on them.

The first Outsider seen in the film is a young cub named Kovu. Upon first meeting him, Kiara takes her father's advice, never turning her back on the stranger. Intrigued by her behavior, Kovu questions her and then mocks her for always following her father's rules. He then boasts that an Outsider is self-reliant and can take care of himself.

Not long after their encounter, Zira shows up to defend her son, and Simba jumps up in his daughter's defense. The two have a stand-off, during which Zira laments the poor conditions of the Outlands, where her pride is deprived of food and water. Unsympathetic, Simba reminds her that the penalty for an Outsider straying into the Pride Lands is death. Testing Simba, Zira pushes her son forward, but Simba takes pity on the cub, ordering Zira and Kovu to leave the Pride Lands.

Once home again, Zira yells at Kovu for associating with a Pride Lander, reminding him that Simba has banished their pride from the Pride Lands for staying loyal to Scar. She then gets a marvelous idea, plotting for an older Kovu to woo Kiara in order to gain Simba's trust and then kill him. She then sings "My Lullaby", during which her vengeful pride echoes her murderous intentions.

Years later, the plan is set in motion, and Nuka and Vitani set fire to the Pride Lands, making way for Kovu to save Kiara and wedge his way into Simba's pride. While the Outsiders wait excitedly for Simba's downfall, Kovu begins to genuinely fall in love with Kiara, and he refuses to kill the king. Sensing Kovu's betrayal, Zira and her pride ambush Simba, leaving him severely wounded. Though Simba escapes, Nuka dies during the attack, leaving Zira in a fury.

The vengeful lioness leads her pride into battle against the Pride Landers, and the Outsiders exert well-honed battle strategies and skills. Despite the ferocious tussle, the fight is soon stopped by Kovu and Kiara, who convince Simba to treat the Outsiders as one with the Pride Landers. When Vitani is swayed by Kiara and Kovu's plea for peace, the other Outsiders become disillusioned from Zira by her callous declaration that she'll kill Vitani as well. They turn on Zira and join Simba's side in favor of peace and a better life.

After Zira's death, Simba welcomes the Outsiders back into his pride. Once back at Pride Rock, the Outsiders-turned-Pride Landers witness the union of Kovu and Kiara. They then bow their heads as first Simba and Nala, then Kovu and Kiara stride past and roar out over the kingdom.

The Outsiders force Jasiri and her clan from their watering hole. Jasiri goes to Kion for help, and Zira tries to convince him to side with the Outsiders over the hyenas. When he refuses, the Outsiders trap him in a ravine, and he is saved by the rest of the Lion Guard. He then expels the Outsiders using the Roar of the Elders.

The Outsiders are seen in a cave painting in the Lair of the Lion Guard.

The Outsiders are mentioned by Jasiri when she warns Kion about Zira's ongoing attack on the Pride Lands, prompting the Lion Guard to return to the Pride Lands to stop them.

When the Lion Guard returns to the Pride Lands after months of healing at the Tree of Life, Vitani, who has formed a Lion Guard in Kion's absence, mistakes the group for attackers and engages in a battle with them, aided by four other Outsider lionesses. However, the fight is halted by Kovu and Kiara. After reuniting, Kovu and Kiara tell Kion of the events that transpired while he was away at the Tree of Life, including how the Outsiders joined Simba's pride.

A Little Help From a Friend

Just as Simba is about to take his young daughter on a walk around the Pride Lands, Zazu reports that Outsiders have been spotted in the kingdom near the western canyon. With such news, Simba is forced to cut the walk short and proceeds to drive out the intruders.

Throughout the film, the lionesses appear to look the same, but some resemble the more prominent lions and lionesses in the pride.

Though most Outsiders assume duller-colored pelts,

they do share physical similarities with Zira. Like Zira, some have pointed chins, though all are sharp-featured and appear far more menacing than the other lionesses.

These lionesses can be seen watching Zira endearingly as she talks about her dream during the musical number "My Lullaby."

Despite the fact that Nuka is male, some of the lionesses do share his features.

Most Ousiders share Nuka's grayish coloration but lack the tint of red that he has. Their eye shades mimic his shape and sometimes share his color. Like Nuka, their faces are long but are not sharp like Zira's, and they look far more emaciated than the other lionesses do.

These lionesses appear during Zira's ambush and later fight in the final battle.

Mainly absent throughout the film, some of these

lionesses are colored lighter than Vitani herself. However, like Zira, they can also be darker.

These lionesses can be seen during Nuka's death and as Kovu receives his scar. They are also seen when Zira rallies her pride and prepares them to fight against the Pride Landers. They dominate the pride when Kiara points out their similarities to the Pridelanders.

There are Outsiders who resemble the Pride Landers far more than the Vitani- or Zira-esque lionesses. They appear in the war, a few of them getting a few detailed seconds of screen-time when they chase and corner Timon and Pumbaa. Though they resemble the Outsiders in color, they have the filled-out heavy builds of a typical Pride Lander lioness.

Outsiders live for conflict; more specifically, conflict with the Pride Landers. They are a determined and uncouth breed, willing to wade through rain-stirred mud in order to start a war. When Simba offers them a chance to go home and avoid conflict, they refuse and attack. However, they aren't all mindlessly violent. When offered a chance to enter the Pride Lands for a better and more peaceful life, they eagerly accept, even submitting to Simba, their once sworn enemy. Only Zira refuses, still consumed by hatred, the past, and her obsessive worship for Scar. Later on, Vitani and several other Outsiders become devoted to protecting the Pride Lands under Simba's reign as the new Lion Guard. 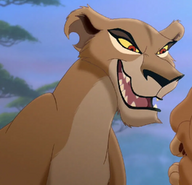 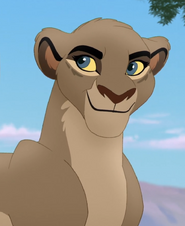 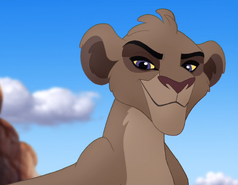 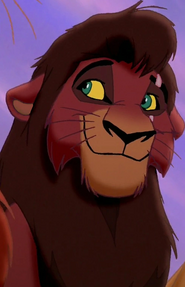 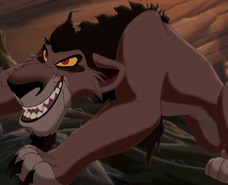 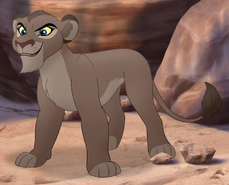 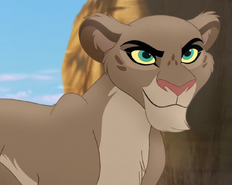 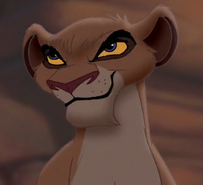