"Ono must fill in for a rhino's 'seeing-eye bird' while the Guard helps the rhino and tickbird resolve their differences."[1]

At first, Kifaru is defensive, but he softens at the appearance of Beshte, who calms him long enough for the Lion Guard to free his horn from the tree. Once unstuck, Kifaru thanks the team for their help, and Kion questions him as to why he had caused so much destruction. Kifaru reacts obliviously, and the Lion Guard explains that he had shaken the baboons out of their tree and trampled every tree in his path.

Bewildered, Kifaru admits that he had wondered why there were so many trees on the path to Lake Matope. He then ambles off, and the Lion Guard realizes that he is heading straight for another tree. Ono shouts that Kifaru doesn't know where he's going because he doesn't have his tickbird, and darts in front of the rhino, warning him to keep back.

Ono asks Kifaru where his tickbird is, and Kifaru admits that his tickbird, Mwenzi, had left him earlier that morning. Though the Lion Guard is confused, Ono explains that rhinos have poor eyesight and use tickbirds to help with navigation. In exchange, the tickbirds eat the ticks off the rhinos' backs. Kifaru then sings "Tickbirds and Rhinos", in which he explains the partnership between the two species.

After the song, Kifaru laments being unable to reach Tamasha, an event in which rhinos gather near Lake Matope to spar together in the mud. The Lion Guard is touched by his sorrow, and Kion resolves to find Mwenzi for Kifaru. Bunga volunteers to lead Kifaru to Lake Matope so that he arrives in time to participate in Tamasha, and Kifaru hesitantly accepts.

However, as he is leading Kifaru, Bunga becomes so distracted by eating ticks that he fails to notice a cliff in their path. Just in time, Ono steps in to halt Kifaru, impressing the rest of the Lion Guard. Ono explains that birds and rhinos have a special connection, and Kion suggests that he become Kifaru's temporary tickbird. In the meantime, they will search for Mwenzi and convince him to return to Kifaru. Ono protests the appointment, but gives in when Kion reminds him that helping Kifaru will keep the Pride Lands safe.

As the Lion Guard takes off in search of Mwenzi, Ono begins to guide Kifaru toward Lake Matope. He tells Kifaru to take a right turn, but the rhino instead takes a left turn, which prompts Ono to frantically correct him. The two continue on their journey, and Kifaru begins to grunt and snort loudly, much to the irritation of Ono. Eventually, Ono tells Kifaru to turn right, but the rhino once more veers to the left, and Ono shouts at him to take the right direction.

An upset Kifaru comments that Mwenzi had never shouted at him. He then grows so emotional that he walks away, sobbing, and Ono is forced to apologize to him. Kifaru then asks Ono if he will itch inside his ear, and Ono agrees, though he completes the job half-heartedly. Kifaru remarks that Mwenzi would never stop itching until he had been instructed to, but Ono reminds him that he is not Mwenzi. Kifaru agrees sorrowfully, then belches loudly, to which Ono mutters under his breath that he hopes the Lion Guard will find Mwenzi soon. Kifaru overhears him and chastises him for muttering under his breath, which Mwenzi had never done.

Meanwhile, the rest of the Lion Guard tracks Mwenzi's scent to a tree. Bunga climbs into the tree to search for Mwenzi, but finds it vacant. However, as he's skidding back down the trunk, he catches sight of a bird darting around nearby, and Beshte recognizes him as Mwenzi. He calls out to Mwenzi, but the bird does not reply. Kion then gets an idea, and Beshte lures Mwenzi into the open by pretending to be a rhino in need of a tickbird.

When Mwenzi lands on Beshte's back, Bunga tackles him to the ground and holds him hostage while the rest of the Lion Guard gathers around. Fuli explains that Kifaru is causing damage all over the Pride Lands without Mwenzi, and Kion encourages Mwenzi to return to his duties. An indignant Mwenzi recounts how Kifaru had blamed him for running late to Tamasha and explains that every year, it is Kifaru's fault for being late, yet he continuously blames Mwenzi for their tardiness.

Beshte reminds Mwenzi that Kifaru is his friend and explains that Kifaru is lost without his tickbird, to which Kion adds that Mwenzi is not doing much better on his own. Mwenzi admits that he is used to having a job to do, and Beshte encourages him to talk to Kifaru about the situation. Reluctantly, Mwenzi concedes and leaves with the Lion Guard to speak to Kifaru.

Meanwhile, Ono brings jackalberry leaves to Kifaru, but the rhino complains that he only likes dark green jackalberry leaves. He then compares Ono to Mwenzi, which infuriates Ono. After a moment of cold silence, Kifaru tells Ono that he should thank him, for if Ono had not been so bad at being a tickbird, Kifaru would never have realized how good a tickbird Mwenzi is.

Kifaru starts to amble off, but collapses on the ground, panting. He comments that the constant walking has gotten him overheated and adds that Mwenzi would always make sure to keep them near a source of mud while they were traveling. Thinking quickly, Ono begins to use his wings as a fan, much to Kifaru's delight. Kifaru comments that Mwenzi is too small to be able to use his wings as a fan, and Ono wonders if Kifaru has finally found something that Ono is better at than Mwenzi. Kifaru agrees, not knowing that Mwenzi and the Lion Guard are listening from nearby.

Mwenzi angrily accuses the Lion Guard of misleading him and confronts Kifaru in a fury. Though Kifaru begs him to stay, Mwenzi flies off across the savanna, and Kifaru calls after him despairingly. He then states that Ono must serve as his tickbird from now on, and Ono takes off after Mwenzi, leaving Kifaru in the care of the Lion Guard.

With Ono gone, the Lion Guard gathers around Kifaru. While Bunga climbs atop his back and ponders where all the ticks have gone, Kion checks on Kifaru's well-being. Kifaru admits that with both his tickbird and his backup tickbird gone, he is not in a great mood. To cheer him up, Kion reminds him of Tamasha and volunteers to lead him there with the help of the other members of the Lion Guard.

Across the savanna, Mwenzi alights near a swamp, and Ono warns him that Makuu and his float frequent the area. Despite Ono's warning, Mwenzi refuses to trust him and accuses him of taking his place in Kifaru's life. Ono protests that throughout their time together, Kifaru had done nothing but complain about Ono and compare him to Mwenzi. Ono then questions Mwenzi on how he had gotten Kifaru to make a right turn, and Mwenzi explains that he had simply told Kifaru to make three left turns.

Slowly, Mwenzi begins to warm up to Ono and thinks back wistfully on his time with Kifaru. He sings a reprise of "Tickbirds and Rhinos", in which he reflects on the partnership of rhinos and tickbirds. After the song, Mwenzi agrees to reconcile with Kifaru, but just then, Makuu attacks, hurting Mwenzi's wing and knocking him into the branches of a tree. Ono manages to save him from Makuu, but leaves to fetch the Lion Guard for help.

In the meantime, the Lion Guard manages to lead Kifaru to Tamasha, but before he can take part in the activities, Ono arrives with news that Mwenzi is in trouble. In a panic, Kifaru takes off to save his friend.

Across the savanna, Makuu continually knocks his tail against Mwenzi's tree in an attempt to dislodge him. He manages to jump up and bite Mwenzi's branch in half, leaving him with little room to maneuver, but before he can try again, Kifaru arrives and charges at him. However, Kifaru misjudges Makuu's location and rams into a tree stump, trapping his horn in bark. Makuu sees Kifaru's prone position as an opportunity for larger prey and rallies his float to take down the rhino.

Just then, the Lion Guard arrives and fights Makuu off. During the commotion, Mwenzi hops down from his tree and instructs Kifaru on how to free himself from the tree stump. Once free, Kifaru uses the tree stump as a weapon and helps free the other Lion Guard members from their entanglements. He rams Makuu last, knocking him and the tree stump into the swamp, and yells after him that that's what he gets for messing with Mwenzi.

After the fight, Kion thanks Kifaru and Mwenzi for their help, and the two attribute their victory to each other. They then briefly reprise "Tickbirds and Rhinos", reconciling their friendship. Kifaru informs Ono that he does not need him to serve as a tickbird anymore, and Ono happily obliges.

Back at Tamasha, Mwenzi helps Kifaru face in the right direction in order to watch the fight. As they survey the sparring, another tickbird questions Mwenzi on his fight with Kifaru, and the two deny ever having fought. In the background, the Lion Guard watches contentedly, and Bunga asks Ono if he will serve as his tickbird. Ono reassures Bunga that they will always be friends, but asserts that his days as a tickbird are over. 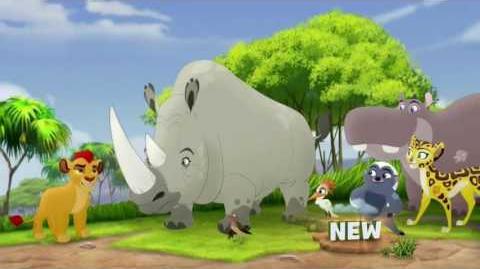 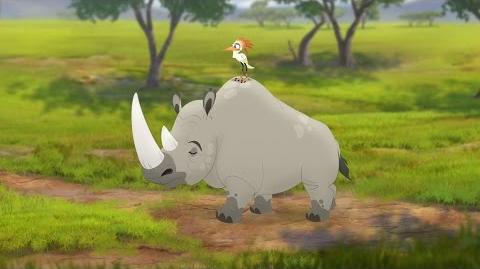 Retrieved from "https://lionking.fandom.com/wiki/Ono_the_Tickbird?oldid=288723"
Community content is available under CC-BY-SA unless otherwise noted.