"When Ono meets his idol, the legendary eagle Hadithi, he learns that his hero isn’t what he expected. John O’Hurley (“Seinfeld”) guest stars as Hadithi."[1]

Mtoto the elephant is playing with his friends when a massive flock of birds flies overhead. The Lion Guard arrives on the scene and decides to scout out the situation. From a nearby ridge, they spy the birds gathering in a clearing, but before they can investigate, their friend Ono calls them over to a spot at the front. He explains that the birds have gathered for the return of Hadithi, the legendary eagle, who is famous for his "Hadithi Spin."

Just then, Hadithi arrives to much cheering from the gathered birds. A raven calls for Hadithi to say something wise, and he replies with, "The higher you fly, the more they'll look up to you." Though Ono is awed, the rest of the Lion Guard is unimpressed. Bunga decides to ask Hadithi about his famous spin, but Ono blocks his path, insisting that no one can simply talk to Hadithi. He then begins to list off Hadithi's accomplishments to Bunga, which prompts Hadithi himself to chime in with another example.

Hadithi comments that Ono seems to know a lot about him, to which a shocked Ono agrees and declares that he is Hadithi's biggest fan. Hadithi admires Ono's devotion, but points out that he has many adoring fans. He then launches into the musical sequence "Hadithi the Hero", in which he boasts about his past accomplishments and how popular he is among the Pride Landers.

After the song, Simba and Nala arrive and inform Hadithi that he is a hero to many animals in the Pride Lands, not just birds. Kion is surprised that his parents have heard of Hadithi, and Nala explains that Hadithi is a hero to many animals on the savanna. Simba then announces to the crowd that Hadithi is a selfless hero who never abandons an animal in need, and invites Hadithi to attend a Royal Mud Print ceremony. Bunga wonders what this ceremony is, and Ono explains that Hadithi will press his talons into mud and have his prints forever preserved alongside those of other heroes.

Simba continues that it is tradition for the hero to mentor a younger member of the Pride Lands. Kion nominates Ono to the position, and Simba accepts the suggestion. With business concluded, he and Nala begin to depart, but Hadithi stops them and requests that a ceremonial nest be built in his honor. Ono volunteers the Lion Guard to perform the service, and Kion assents.

After Simba and Nala leave, Hadithi thanks the Lion Guard for accepting the job and tells them to build his nest using leaves from the highest tree in the Pride Lands, as per tradition. Fuli expresses irritation at this latest request, but Ono defends his mentor by pointing out that the fronds at the top of the trees are the softest. The Lion Guard then relents and takes off to perform their latest duty.

On the way to the tallest tree in the Pride Lands, Fuli wonders whether they should be doing more important work than building a ceremonial nest, but Beshte defends the task by reminding her that Hadithi is Ono's hero.

Meanwhile, Hadithi preaches to a crowd of Pride Landers and repeats his earlier words of wisdom. Though the birds are impressed, an elephant named Zito points out that elephants cannot fly. Ono explains that Hadithi is trying to say that all animals have challenges in their lives that require them to rise above themselves.

Across the Pride Lands, Kion laments having left Ono behind with Hadithi, as the tallest tree in the Pride Lands is difficult to climb. Bunga volunteers for the task and clambers his way to the top of the tree. From there, he overlooks the Pride Lands and spots an even taller tree across the savanna.

In the meantime, Hadithi finishes delivering another speech, and Ono steps up to handle crowd control. Hadithi watches, impressed, and tells Ono that he is a natural. In awe, Ono requests that he be taught the Hadithi Spin, but Hadithi refuses promptly, claiming that he does not wish to ruffle his feathers before the Royal Mud Print ceremony. However, he volunteers to watch Ono attempt the trick and correct him if he is wrong.

Though nervous, Ono attempts the spin, but ends up crashing into the ground. He admits that he had forgotten to compensate for the wind, but Hadithi comments that the wind has always compensated for him. However, he encourages Ono to try again, and Ono boldly declares that he will get it right this time.

At Pride Rock, Bunga carries the leaves for Hadithi's nest to the mud pit. However, he trips halfway up and has to clean up the spillage. Not far away, Mtoto graciously gives up a spot at the front, and Beshte compliments him on his kindness. Mtoto simply replies that Beshte will always be his favorite hero.

Across the Pride Lands, Ono continues to attempt the Hadithi Spin and manages to work himself up to two and a half loops. He excitedly relates his progress to Hadithi, but gets deflated when he realizes that his mentor had not even been watching. Hadithi explains that he must look his best for the ceremony, then tells Ono that he doubts the egret will ever be able to achieve the spin.

As Hadithi takes off for the ceremony, Ono follows him and protests that Hadithi had called him a natural earlier. Hadithi explains that he had meant Ono was a natural with the crowd and that he gives the animals exactly what they want to hear. Ono protests that he is simply being honest, to which Hadithi scoffs.

The two continue flying, and Ono spots a group of klipspringers being trapped on the edge of a cliff by Janja and his minions, Cheezi and Chungu. He suggests that they use the Hadithi Spin to thwart the hyenas, but Hadithi argues that Ono is not ready for such a feat. He then takes off for the ceremony, leaving Ono behind to deal with the crisis.

At Pride Rock, Hadithi arrives for the ceremony and lies that Ono is still trying to perfect the Hadithi Spin. The ceremony continues, and Simba praises Hadithi for his heroics, his bravery, and his selflessness.

Meanwhile, Ono attempts to stop the hyenas using the Hadithi Spin, but falls and gets his wing trapped beneath a boulder. Cheezi and Chungu hungrily climb up the cliffs to reach him, while Janja rounds up the trapped klipspringers.

Back at Pride Rock, Hadithi becomes so overrun with guilt that he confesses his cowardice to the crowd and admits that Ono is the true hero. He then calls the Lion Guard to follow him and help rescue Ono. Once at the scene of the crisis, Fuli fends off Cheezi and Chungu, and starts to help Ono free his wing, but Ono urges her to save the klipspringers first. Fuli relents and takes off, just as Hadithi lands next to Ono. He praises Ono for his selflessness, even in the face of being trapped, and admits that he could learn much from Ono's example.

As Hadithi pries the boulder off Ono's wing, he apologizes for having abandoned Ono to the hyenas and admits that he is not a true hero. He then confesses that the Hadithi Spin is not real, to which Ono states that he had figured this was the case. However, he boldly declares that they can still try the Hadithi Spin and calls for Hadithi to follow him.

Meanwhile, Bunga and Kion confront Janja, while Beshte pushes a boulder down for the klipspringers to use as an escape. As Fuli guides the klipspringers to safety, one slips and falls, prompting Janja and his minions to spring an attack. Just in time, Ono and Hadithi fly past and begin to circle the hyenas, making them dizzy. Eventually, they topple off the cliffs and land in the water below.

That night, Ono marks the mud at Pride Rock with his own talons, and Hadithi admits that it had been Ono who had taught him, not the other way around. He then calls Ono a natural hero, and the gathered Pride Landers cheer for him. To conclude the ceremony, Hadithi announces Ono as the creator of the Ono Spin. 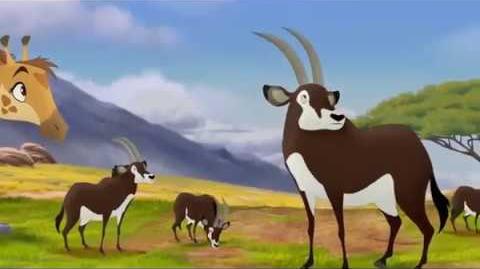 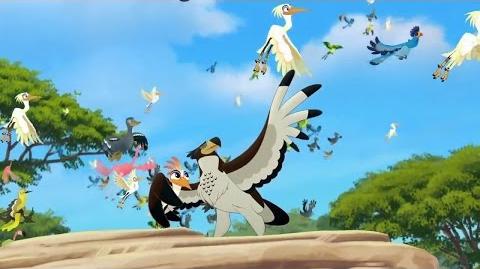 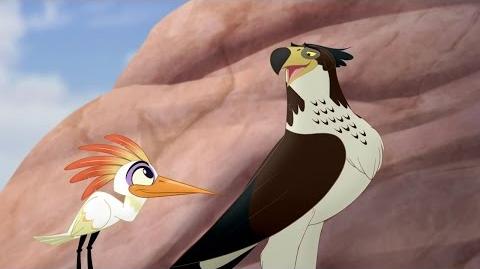 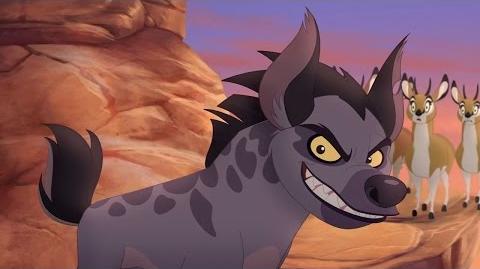 Retrieved from "https://lionking.fandom.com/wiki/Ono%27s_Idol?oldid=286935"
Community content is available under CC-BY-SA unless otherwise noted.