Once Upon a Timon

"Once Upon a Timon" is the nineteenth episode of Season 2 of The Lion King's Timon & Pumbaa. It aired on November 11, 1996 on the syndicated Disney Afternoon block.

"In this two-part special episode, Zazu visits Rafiki to learn why Timon is an outcast. Zazu learns from Rafiki how Timon and Pumbaa met."[1]

Zazu informs Rafiki about Simba's royal reputation being at stake, and is a bit concerned about Timon and Pumbaa and their influence on the lion. He had just given them a proper form, which they returned, now cut into a sign that says "Hakuna Matata". While he knows why Pumbaa is an outcast (due to his odor), Zazu has yet to know why Timon is an outcast. Rafiki then tells Zazu the story of what happened...

The story begins in an ordinary meerkat colony. The Duke Meerkat was going out to perform some royal duties, leaving Fred in charge of guarding the castle, and his daughter, Tatiana, at home alone. Timon, meanwhile, guards the back gate of the colony, which nobody ever goes through unless they are banished, and minds his own business while thinking about Tatiana. Meanwhile, Fred informs Timon that the Duke is gone for the day, and that Tatiana is alone. Timon doesn't think that he and she would go out, and that she needs a brave, cunning, and resourceful meerkat. Fred then tells him that all Timon needs to impress her are candy and flowers (and a bath). Timon vetoes the idea, saying that if he abandons his guard post, he'd be banished. But as Fred sees it, not if Timon doesn't get caught, and he later returns to his post at guarding the castle. Timon thinks about what Fred says and, seeing that he was right, places a mop as a dummy in place of his spot at guarding the back gate, and gets into the colony to buy some candy and flowers for Tatiana.

Little does he know that a cobra has seen that the back gate was unprotected and as Timon is going home to get ready for his date with Tatiana, the cobra goes into the colony to take Tatiana away. This saddens the entire colony, even the Captain of the Guard (whose main duty is to also guard the front gate), but he denies it, however, saying that the cobra didn't go through the front gate to capture Tatiana. After Fred says that nobody goes through the back gate, the Captain senses that Timon isn't with the other guards, and asks where he is.

Timon, getting out of his house, finally ready for his now-canceled date, is shocked at the colony's suspicions, and, after a nervous giggle, he runs off, with the guards giving chase. Timon runs into a dead end after facing the Duke, and is put on trial for abandoning his guard post. The jury finds Timon guilty for that and Timon is sentenced to live in banishment, cast out of the colony.

Rafiki attempts to end the tale, but Zazu wants to know more about what happened to Timon, how he met Pumbaa, and about Tatiana. Rafiki reminds Zazu that Zazu has important business with Simba, but the hornbill thinks it can wait a little longer and asks Rafiki to tell the rest of the story...

After Zazu demands to know the rest of the story, Rafiki continues...

Lost and alone, Timon begins to feel scared while walking around a shadow-filled jungle. He then gasps at the sound of laughter and finds himself inside the mouth of Ed the hyena. He runs out of Ed's mouth and runs into Pumbaa, who was captured by the hyenas. Pumbaa, having been tricked, asks Timon if they invited him over for dinner too. Shenzi, Banzai and Ed gang up on them, saying that they'll have a little "'kat"-nip, and then that they'll "pig" out. Timon and Pumbaa make a run for it, away from the hyenas, and they say their goodbyes and go their separate ways. However, that wouldn't last...

The next morning, while hunting for breakfast, Timon and Pumbaa run into each other again, with the latter asking the former if he was going to the colony. After noticing that their breakfast is getting away, they introduce themselves, and finally catch the bug. However, after Timon hears Pumbaa's breaking-wind, Pumbaa, breaking into song, tells Timon how he feels when other animals tell him to go away, and that he's a loner. Timon tells Pumbaa that he is banished from his colony and stranded, and thinks that in a cold and mean world, the two of them should be Alone Together, that two heads are better than one. Pumbaa hears what Timon is saying correctly, and that they should become the "bestest of friends."

After singing, Pumbaa decides to be Timon's friend over anything he could ever want. Timon feels the same way. A short while later, the silence of the jungle is broken after Timon hears Tatiana's cry for help while about to become a sacrifice for the cobra. Pumbaa feels that once Timon saves her, the warthog would be alone again, but Timon disagrees, saying that once he rescues Tatiana, Pumbaa would join the colony, and that he would no longer be an outcast. Pumbaa is overjoyed by this, and the two of them rescue Tatiana.

Later, after seeing that Tatiana is saved by Timon, the colony opens the front gate in joyous celebration. At the trial, all charges against Timon are dropped for the brave, cunning, and resourceful rescue of Tatiana, and as an added bonus, the Duke offers Timon the key to the city, and Tatiana offers her hand to him in marriage. After Pumbaa reminds him, Timon asks the Duke to declare Pumbaa an official member of the colony--but the Duke says that only meerkats are allowed to live in the colony, and gives Timon a choice between anything he could ever want (power, riches and love) or being Pumbaa's friend.

Rafiki concludes the story, saying that Timon chose to be Pumbaa's friend. From that day forward, neither of them decide to worry about anything, and Pumbaa tells Timon about the name he knows for this philosophy: "Hakuna Matata." 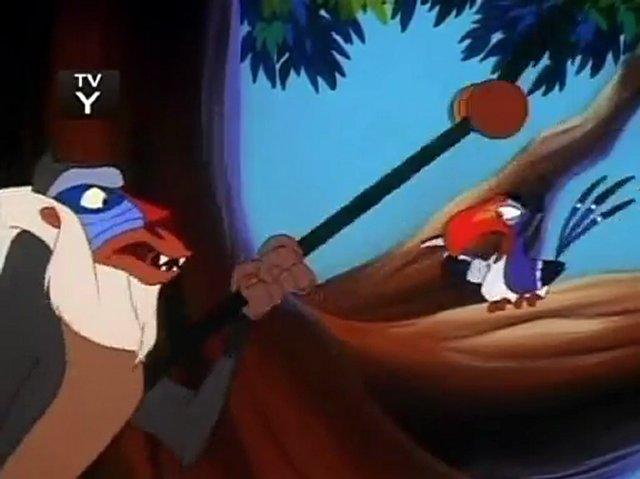