"Okay Bayou?" is the first segment of the twenty-third episode of Season 1 of The Lion King's Timon & Pumbaa. It is the twelfth episode of Season 1 to air on the CBS Saturday morning lineup. It aired on December 16, 1995, along with "Shake Your Djibouti".

"Timon and Pumbaa are in the bayou in search of the all knowing Boudreaux."[1]

Timon and Pumbaa are on a raft, visiting the Louisiana Bayou. Pumbaa moves the raft by using his tail as a motor, while Timon has trouble catching bugs. When Timon complains to his friend about his hunger, Pumbaa tells him that they're problems will be solved once they visit the all-knowing Boudreaux. He tells Timon that Boudreaux, who lives at the mount of the Bayou, is going to teach them to be brave, wise, and true and once the duo proves they are so, he will reward them with bugs, much to Timon's eagerness.

When Timon makes Pumbaa move the raft, the raft bumps into a tree and an opossum falls between Timon and Pumbaa looking dead, making Pumbaa think that they killed him. Timon tests to see if the possum is okay and the two realize that he's just playing Possum so they won't kill him. When Pumbaa tells the possum that they won't hurt him, the possum gets up and happily chatters in Cajun French. Pumbaa suggests that he and Timon can have the possum guide them to the great Boudreaux, which the possum does.

As the three continue their journey, Timon complains to Pumbaa about his hunger again and suggest that they ditch the possum. Pumbaa, however, says that they can't leave until they visit Boudreaux and be taught to be brave, wise, and true. Suddenly, an alligator appears. The possum falls into the water and gets into the alligator's mouth. Timon and Pumbaa jump into the water to rescue the possum and after they do so, the three get back on the raft and escape the alligator. Timon, Pumbaa, and the possum reach to two directions, with the left one looking beautiful and calm and the right one looking dark and scary. The possum tells the two that either one of these directions will take them to the mount of the Bayou. While Timon chooses the direction on the left, Pumbaa and the possum choose the one on the right. Pumbaa and the possum get off the raft to go their direction while Timon goes to his.

It turns out the possum is the all-knowing Boudreaux. Boudreaux tells Timon and Pumbaa to prove themselves to be true by sticking their heads inside the Tree of Truth and if they're true and pure, they are okay, but if they're not, they will get their heads cut off. After Pumbaa takes his turn and is okay, before sticking his head to the tree, Timon confesses that he only wanted to visit Boudreaux for the food instead of proving himself to be brave, wise, or true. When Timon stick his head in the Tree of Truth, nothing happens, making the meerkat realize that the whole thing was a ruse and that Boudreaux only got a free ride on the Bayou. Pumbaa realizes that Boudreaux taught them to be brave, wise, and true during their journey.

As a reward, Boudreaux offers Timon and Pumbaa the bugs inside a tree stump, which he uses as a pot. When Timon eats the bugs, he realizes that they're too hot and quickly gets a drink of water. Timon then starts speaking Cajun French, and Pumbaa compliments the meerkat for learning something from Boudreaux. 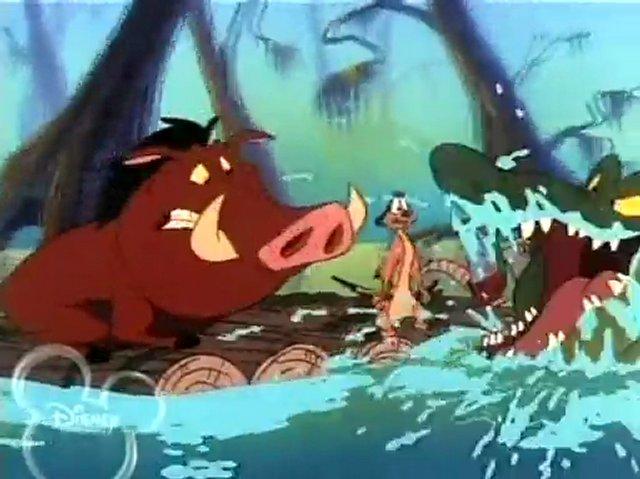 Okay Bayou?
The full episode of "Okay Bayou?"
Add a photo to this gallery

Retrieved from "https://lionking.fandom.com/wiki/Okay_Bayou%3F?oldid=301962"
Community content is available under CC-BY-SA unless otherwise noted.