"At sea, Timon and Pumbaa reunite with Speedy the Snail, whom they've got to save from a sinister jeweller."[1]

Captain Quint is about to throw Timon and Pumbaa off the cruise ship for being stowaways until he is stopped by Speedy, who vouches for the duo. After Timon and Pumbaa thank Speedy for saving them, Timon suggests that he and Pumbaa should ditch the snail since everything is always trying to eat him and it's always up to them to save him.

A married couple then shows up and are delighted by Speedy's shell, suggesting that it would be a perfect earring for the female spouse. They therefore kidnap Speedy, making it up to Timon and Pumbaa to save the snail once again.

While the diamond collector and his wife are about to make an earring out of Speedy's shell, Timon and Pumbaa drill a hole in the ceiling/floor and Timon takes a hook to save Speedy. The diamond collector sees the hook and throws it in the ocean, and Timon accidentally catches an octopus, who attacks the two friends.

On their second attempt to rescue Speedy, Timon and Pumbaa disguise themselves as pirates who want Speedy, but the diamond collector's wife wants to be their pirate queen. After Pumbaa tells the truth, he and Timon get kicked out of the cabin. Timon and Pumbaa are now underwater for their third attempt. Timon spots the room where Speedy and the couple is. The meerkat then drills a hole on the bottom of the boat, while Pumbaa tries to stop him. This makes the boat fall and lands on the two.

Timon and Pumbaa now put various obstacles to trap the married couple and save Speedy. But the plan backfires as the couple passes all the obstacles safely. Timon and Pumbaa then see that Speedy is now made into an earring for the jeweler's wife, realizing that they are too late. The couple enter the ship lounge and, knowing that they can't just remove Speedy from the diamond collector's wife's ear in front of all the other passengers, Timon and Pumbaa decide to be sneaky.

Timon and Pumbaa successfully remove save Speedy from the couple without being noticed. While the three friends are walking on the deck, they get caught by the couple, who have just realized that Speedy is missing from one of the woman's ears. Timon, Pumbaa, and Speedy get chased by couple until they enter the captain's room. Timon makes all the passengers (including the couple) get out of the boat by tricking them into thinking that there is gold underwater. When Pumbaa makes Timon realize that the passengers would get back on the boat after discovering that there really isn't any gold, the meerkat decides to move the ship. 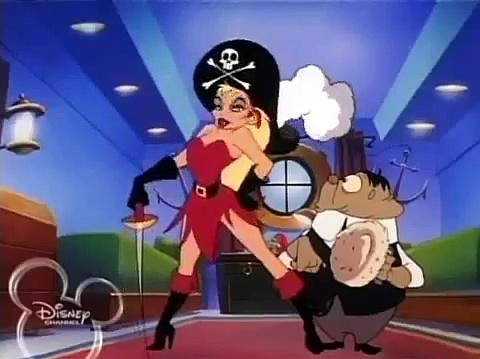 Retrieved from "https://lionking.fandom.com/wiki/Ocean_Commotion?oldid=296536"
Community content is available under CC-BY-SA unless otherwise noted.