"The duo visit a museum where a security guard won't let bug eaters into the Entomology Exhibit."[1]

Timon and Pumbaa visit a museum called C.O.M.A. (the City's Official Museum of Arts), believing it to be an all-you-can-eat restaurant called Big Bernice's Bug Buffet. The tour guide tells them that it is the opening of their priceless Entomology Exhibit, which Timon defines it to be a classification of bugs.

When Timon talks to Pumbaa about the different kinds of bugs the museum has, they decide to admire and eat them. While they are about to enter the Entomology Exhibit, they get caught by a security guard, who blocks their path, telling them that bug eaters are not allowed to enter the exhibit. Timon attempts to lie by telling the guard that he and Pumbaa dislike bugs, but Pumbaa doesn't understand his friend's action.

The security guard catches Timon and Pumbaa and throws them to a storage room. Timon then suggests that he and Pumbaa enter the exhibit while wearing disguises. While they do so, the guard stops them and tells them that they look familiar, which Timon replies by convincing him that Pumbaa is a famous artist named Andy Warthog and that he's his assistant. The guard lets them through, but they get stopped by the curator of the museum, who brings them onstage to make "Andy" do his latest performance art. After doing so, "Andy's" true identity is revealed and he therefore escapes.

The museum then closes, leaving Timon and Pumbaa a chance to sneak into the Entomology Exhibit. Timon makes a plan on how they can enter the exhibit, but Pumbaa suggests that they can just go through the doggy door. When they do so, they get caught by a doberman, who chases them around the museum until they enter the exhibit, which soon gets protected by laser beams. When Timon makes a plan on how to catch one of the bugs, Pumbaa reveals that they can just simply pull down the lever to remove the laser beams.

Timon and Pumbaa then get caught by the security guard and attempt to run away from him while he's giving chase by trying to shoot them with two bazookas. While trying to aim at the duo, guard accidentally destroys all the pieces at the exhibit.

After the chase, Timon and Pumbaa get congratulated for the chaos they did, which is considered to be their latest pieces of art, calling them true artists. Seeing what's going on, the security guard tries to convince the people that he helped, but he instead get scrammed. While they are being praised for their work, Timon and Pumbaa ask the people to take them to Big Bernice's Bug Buffet. 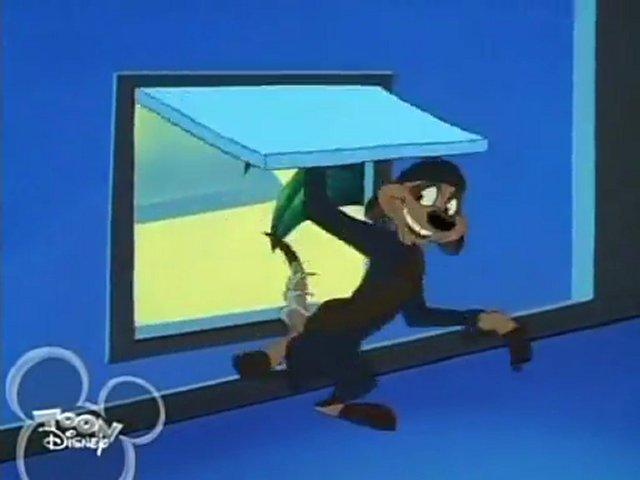