Start a Wiki
watch 01:33
The Loop (Movies)
Do you like this video?
No Need to Hurry is a book inspired by The Lion King.

It was published by Dalmatian Press in 2011.

"There is no need to hurry in this Disney Animal Friends adventure featuring the Lion King. Also in this series Hide & Seek (Bambi), Happy to Help (Dumbo) & Puppy Parade (101 Dalmatians)."

Simba, prince of the Pride Lands, is introduced at the beginning of the book. Simba is a very special cub, but it will be a long time before he is ready to take command of the kingdom. In the meantime, Simba's elders try to teach him things that he should know as king. One day, Mufasa takes his son for a walk. On the way, the lion king attempts to school Simba, but the cub is too focused on a trail of ants to pay attention.

Some time later, Zazu tries to take Simba to Antelope Hill to see a sunrise, but Simba, much to Zazu's annoyance, is intrigued by a nightjar and fails to keep up. After that, Rafiki leads Simba to the Cave of Wonders, the walls of which portray ancient pictures. But because of Simba's interest in a grasshopper, the trip takes all morning. Simba's mother, Sarabi, asks Simba why he always dawdles, explaining that because of his pokiness they never get anywhere. Simba replies that he likes the little things, and Sarabi smiles knowingly.

One day Zazu wakes Simba up early, explaining that Mufasa has asked him to show Simba the farthest part of the Pride Lands. A sleepy Simba requests that his best friend Nala come along too. Along the way, Simba and Nala ignore Zazu's rambling and splash in some muddy water. Zazu begs Simba not to dawdle so much as they continue on their way. Presently, Nala waves her paw at a passing bee and complains about the tiny insect. Zazu chides her, saying that all animals should be respected, and Simba wonders if this rule applies to hyenas as well.

As the trio move on, Simba comes across a lizard-shaped stick and some strange tracks. When Zazu refuses to look at what Simba has found, the cub orders him to do as he says. As Zazu peers at the tracks, he realizes in horror that they are hyena prints. The bird then says in shock that they have strayed out of the Pride Lands, and must return home, but it is too late - a trio of hyenas have spotted Simba, Nala and Zazu. In a panic, the three animals stampede toward home.

Eventually, the three animals outrun the hyenas, and a relieved Zazu comments that it was a good thing that Simba had noticed the hyena tracks. Once back at Pride Rock, Simba pompously remarks that it was a lucky thing that Zazu had brought Simba with him, and Zazu wholeheartedly agrees. 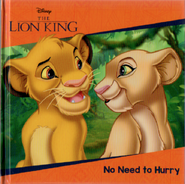 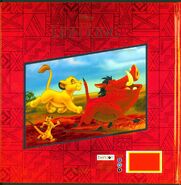 Add a photo to this gallery
Retrieved from "https://lionking.fandom.com/wiki/No_Need_to_Hurry?oldid=208513"
Community content is available under CC-BY-SA unless otherwise noted.