"No-Good Samaritan" is the first segment of the twenty-second episode of Season 3 of The Lion King's Timon & Pumbaa. It aired on May 28, 1999, alongside "Living in De Nile".

"After a leopard princess believes Timon and Pumbaa saved her, they become her royal bodyguards."[1]

A leopard cub named Claudia gets chased by a hyena. When she gets to a dead end, meeting her doom, a gorilla appears and attacks the hyena, causing the hyena to run away with the ape giving chase.

Timon and Pumbaa appear and find Claudia. Claudia's father, Leopold, shows up and is about to attack Timon and Pumbaa. But Claudia stops her father and tells him that the two saved her life. Leopold then reveals to the duo that he is the king of the leopards and offers them a rewarding for "saving Claudia from the hyena."

Timon and Pumbaa are getting pampered at Leopold's place, with Pumbaa feeling a little guilty for being mistaken for saving Claudia's life while Timon decides to take advantage. Meanwhile, Claudia wants to go out and play with her father, but the king is too busy to do so. He therefore makes Timon and Pumbaa become his daughter's bodyguards and tells them that if they succeed with their duties, there will be a position for them at the royal court. Pumbaa states that he and Timon don't know how to be Claudia's bodyguards, but Timon says that they just have to try to keep the cub out of trouble and warns Pumbaa that they would get in trouble with Leopold if they don't do their job well.

Claudia takes Timon and Pumbaa to a plain field as she believes to be a fun place since they never know what they would run into. The ground then shakes and there reveals to be a herd of wildebeests stampeding. While Pumbaa quickly goes to the edge of a rock with Claudia, Timon gets trampled by the herd twice.

Claudia then takes Timon and Pumbaa to her favorite tree, as it is a home of the world's largest python. The python shows up and grabs Timon while Pumbaa and Claudia are sliding over the snake. Pumbaa suggests that Timon tells Leopold that they did not really save Claudia from the hyena. Before Timon tells Leopold the truth, the king deals with another leopard, whom he scolds and attacks for failing to look after Claudia earlier, telling him that she would've gotten seriously hurt by the hyena if it weren't for Timon and Pumbaa's bravery. Worried by what he saw, Timon decides not to tell Leopold the truth.

Claudia takes Timon and Pumbaa to a cave. At first, Timon refuses to enter until the princess tells him that it has really big bugs. When Timon and Pumbaa follow Claudia inside the cave, Timon gets caught by a giant spider. After Pumbaa saves Timon from getting eaten, Claudia takes the duo to a ravine. While the three are relaxing in the water, Timon gets bitten by tigerfish and later gets attacked by crocodiles. Pumbaa then makes Timon try to tell Leopold the truth once again. However, the meerkat still hesitates to do so as he is afraid what Leopold will do if he finds out.

Claudia takes Timon and Pumbaa to other parts of the jungle, all in which Timon has rough times. Despite all the trouble Timon gets into during the adventures, the meerkat still refuses to let Leopold know that he and Pumbaa did not really rescue Claudia from the hyena.

Timon, Pumbaa, and Claudia then find themselves in the sacred fobidden buriel browns of the bull elephant, with the curse being that the skeletons of the said elephants come out of the ground and attack.

After getting trampled by the bull elephants, Timon eventually decides to tell Leopold the truth. After hearing the truth, instead of attacking Timon, Leopold is impressed, stating that he admires honesty more than courage. For setting a good example to Claudia, he gives Timon and Pumbaa a promotion, which is to look after his two sons, who, according to him, are naughty unlike his daughter. 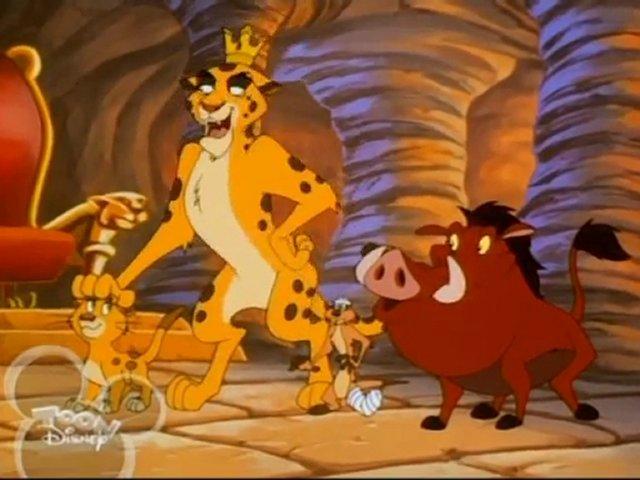