"New Guinea Pig" is the second segment of the second episode of Season 2 of The Lion King's Timon & Pumbaa. It aired on September 9, 1996 on the syndicated Disney Afternoon block, alongside "Oregon Astray".

"Pumbaa hates having 'useless' tusks, so Timon sells them."[1]

Timon and Pumbaa are visiting the jungle of New Guinea, with Pumbaa getting annoyed by his tusks as they are preventing him from doing anything in the jungle.

Pumbaa is upset about his tusks and wants to get rid of them. But Timon tells him that having tusks is not so bad and that he even wishes he had them. However, now that he thinks about it, he changes his mind, though he tells Pumbaa that his his tusks are an important part of what makes him who he is. Pumbaa, on the other hand, suggested that he could trade his tusks to the three natives and get something really expensive. Timon agrees with the idea.

Timon and Pumbaa open a tusk shop called Tusks 4 Less, with Timon advertising Pumbaa's tusks to the natives. The natives each offer Timon and Pumbaa some expensive objects for Pumbaa's tusks, which are a hoof buffer, air freshener, and a golden statue of Timon with diamonds, rubies, and emeralds. Timon chooses the statue of himself and asks the natives to label the bottom "Timon Berkowitz: the Brains of the Outfit" by the next day.

While Timon and Pumbaa are on their way home, Pumbaa tells Timon that it is the last time he does every single activity with his tusks, much to the meerkat's annoyance. While the two are asleep, Pumbaa has a dream that he won a tusk pageant. However, the dream turns into a nightmare when his tusks fall off, revealing that they were fake and that he traded his real ones to the natives. When Pumbaa becomes the laughing stock in the nightmare, the warthog wakes up in fear and begins to worry about losing his tusks.

The following day, Timon and Pumbaa are back at the shop with Timon earning the statue of himself with the bottom labeled exactly what he asked to natives to do. Timon now forces Pumbaa to trade his tusks to the natives, but the warthog is unable to remove them, realizing that his tusk bones are permanently attached to his head bones. Therefore, the natives plan to kill Pumbaa to take off his tusks, which makes Timon and Pumbaa run and the natives chase them. While they are running from the natives, Pumbaa realizes that his tusks are after all useful, as he uses them to free Timon from a tree after the meerkat got his tail shot with one of the natives' spears and to make a giant cube in the shape of himself to fool the natives.

When the natives realize that they got tricked with the ice cube, they continue chasing Timon and Pumbaa. The two friends come across a fancy restaurant which requires tusks except for meerkats. Timon and Pumbaa enter the restaurant and the natives chase them inside, but soon get kicked out since they don't have tusks. The students then off take their native costumes, stating that they've had enough of the tusk business and then go back to their university.

Meanwhile, while Timon and Pumbaa are enjoying their meal at the restaurant, Pumbaa tells Timon that he was right about his tusks being an important part of what makes him who he is. The warthog suddenly flatulences, making Timon decide that they should now think on what to do with his gas. 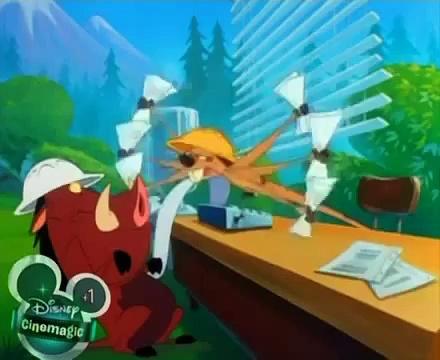