"When Kion gets separated from the rest of the Lion Guard, he finds himself lost in the Outlands, where he meets Jasiri, a friendly female hyena, who rescues him and helps face off against Janja and the other hyenas. Maia Mitchell (The Fosters) guest stars as Jasiri."[1]

Janja and his cronies, Cheezi and Chungu, chase a herd of oryx in the Pride Lands. However, before they can harm the herd, the Lion Guard arrives and chases them off. While Kion trails the hyenas to ensure that they will leave the Pride Lands, the rest of the Lion Guard stays behind to tend to the panicked herd.

Kion chases the hyenas as far as the Outlands, but as he crosses a log, it breaks beneath his weight, and he falls into the raging river below. The rest of the Lion Guard attempts to save him, with Beshte and Bunga leaping in after him, but the current proves too strong for them. Kion barely manages to pull himself to safety on the opposite bank of the river, in the Outlands.

Ono swoops down to check on his winded friend, and Kion admits that the river is too rough for crossing. He then instructs his friends to meet him at Flat Ridge Rock while he attempts to navigate through the Outlands. Bunga claims to know where Flat Ridge Rock is, and Kion sends Ono after his friends in order to ensure that they make it safely.

Back in the Pride Lands, Bunga leads the Lion Guard into an area of dense jungle. After a few mishaps, including a run-in with Ushari, the friends realize that Bunga is lost. Meanwhile, Kion is navigating his way through the Outlands when he runs into a mysterious hyena, Jasiri, who claims that he is going the wrong way. Despite such news, Kion chooses to ignore her and forges his own way through the dangerous Outlands.

At the same time, Beshte suggests they talk to a rhinoceros named Mbeya who might be familiar with Flat Ridge Rock, and the Lion Guard agrees to the new plan. As Kion forges his way through the Outlands, he discovers that Jasiri is following him. Though suspicious, he doesn't attempt to stop her and continues making his way up a large pile of rocks. Despite Jasiri's continued warnings that he's going the wrong way, Kion climbs to the top, only to fall into a hedge of thorns. Jasiri leaps down after him, laughing.

While Beshte is talking to Mbeya, his friends wait on the edge of the watering hole. Eventually, the friends grow impatient and insist that Beshte wrap up his conversation. Realizing that he had forgotten to ask about Flat Ridge Rock, Beshte rushes back to ask Mbeya for directions.

As Kion struggles to untangle himself from the thorns, Jasiri teases him for being so foolish, but she helps him out of the thorns nonetheless. Though still suspicious, Kion is amused by her attempts at banter. With Beshte in the lead, the Lion Guard continues to search for Flat Ridge Rock until Ono picks it up on his radar. Fuli then speeds ahead of her friends, and the Lion Guard scrambles to catch up.

Back in the Outlands, Kion accuses Jasiri of having not warned him of the trail ending, and she agrees with him, laughing. Despite this, she points him in the right direction, but as Kion moves to leave, she notices that he now has a limp and decides to help him on his way, since it's her fault that he'd gotten injured to begin with.

With Fuli having sped ahead, the other members of the Lion Guard labor to catch up with her. Once they reach Flat Ridge Rock, they complain that Kion never would have left them behind, and Fuli apologizes for being over-eager.

As Kion and Jasiri continue through the Outlands, Kion lectures Jasiri on the Circle of Life, but she points out to him that she knows all about the Circle of Life. She then explains that hyenas and lions are not so different, solidifying a tentative friendship between them ("We're the Same (Sisi Ni Sawa)"). No longer so suspicious of one another, the two reach Janja's territory, and Jasiri sends Kion on his way.

However, as Jasiri walks back through the Outlands, she is confronted by Janja, who surrounds her with hyenas. Kion, who is still in hearing range, overhears the confrontation and races back to Jasiri's aid, chasing the clan away with the Roar of the Elders. No sooner has he done this when the Lion Guard shows up, ready to fight Jasiri, but Kion insists that she's a friend. Together, the friends walk to the border of the Pride Lands, where Jasiri and Kion exchange fond farewells. 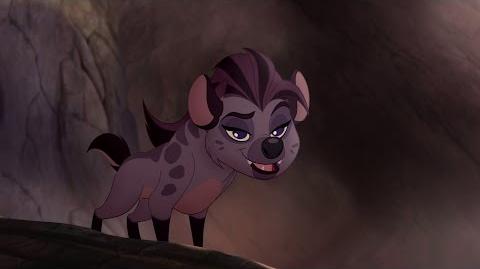 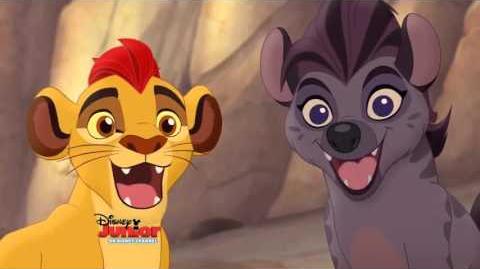 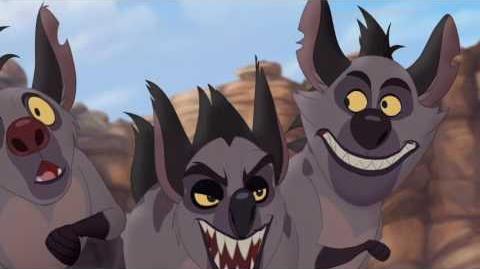 The Lion Guard Jasiri and Kion battle Janja's clan!
Kion and Jasiri take on Janja's clan
Add a photo to this gallery

Retrieved from "https://lionking.fandom.com/wiki/Never_Judge_a_Hyena_by_its_Spots?oldid=302746"
Community content is available under CC-BY-SA unless otherwise noted.