"Nest Best Thing" is the second segment of the ninth episode of Season 3 of The Lion King's Timon & Pumbaa. It aired on February 26, 1999, alongside "Circus Jerks".

"The boys accidentally build a birdhouse for a criminal mastermind!"[1]

Timon climbs a tree to catch a beetle. After he succeeds, the tree branch breaks, causing him to fall and Pumbaa getting hit in the head by the branch.

Timon and Pumbaa then meet a bluebird named Little Jimmy, who states that he lost his home. Pumbaa decides to build a new house for Little Jimmy, but Timon refuses to do so since it's too much work. When Pumbaa leaves Timon with Little Jimmy to get some tools to build a birdhouse, the bluebird suddenly changes from cute to criminal mastermind, revealing that he is a crook.

Little Jimmy forces Timon to help build the birdhouse as well as keeping his criminal mastermind nature a secret from Pumbaa, otherwise he will kill him. When Pumbaa returns, Timon is about to explain to Pumbaa what just happened until he is interrupted by Little Jimmy.

While Pumbaa reads the manual, Timon swiftly builds the birdhouse, with Pumbaa happy about their teamwork being successful. Little Jimmy, however, is unsatisfied with the house, stating that he would like it to be bigger with different kinds of items inside. When Timon and Pumbaa finish rebuilding the house, Little Jimmy asks for a security system, an electric fence, and a mote.

After Timon and Pumbaa add the things Little Jimmy asked for, Timon tries to convince Pumbaa that Little Jimmy is a dangerous criminal mastermind trying to kill him, but the warthog doesn't believe him as he thinks the bluebird is a cute hatchling who would never do such a thing. After Little Jimmy asks Pumbaa to try the drawbridge, a group of pigeon police officers led by Captain Finch arrive and try to arrest Little Jimmy, making Pumbaa realize that Timon was right.

After Finch thanks Timon and Pumbaa for helping them catch and arrest Little Jimmy, Pumbaa apologizes to Timon for not wanting to believe him in the first place. Timon accepts his friend's apology and states that from this day forward, they will never again use any tool. However, when the police announces that Little Jimmy has escaped, Timon builds a hideout for himself and Pumbaa to hide from Little Jimmy. 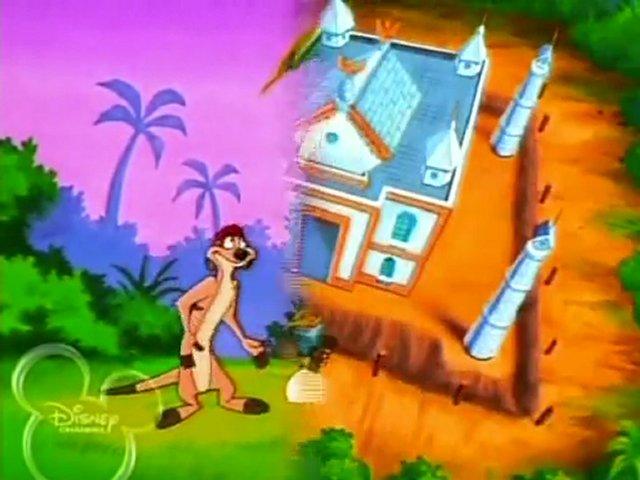