"Nearly Departed" is the first segment of the thirty-second episode of Season 3 of The Lion King's Timon & Pumbaa. It aired on August 6, 1999, alongside "Early Bird Watchers".

"After being stung by a beetle, Timon and Pumbaa think they only have 24 hours left and try to make the best of it."[1]

While Timon and Pumbaa are chasing some bugs, they come across a scorpion-like beetle which stings the two friends. Timon reads a book that states that the bug that just stung them is called a Red-Skeetled Orpion and that its venom is fatal after twenty-four hours and there is no cure. Depressed that they will die, Pumbaa complains about himself living a dull life. Timon and Pumbaa then decide to spend their last days doing the things they haven’t done: Timon acting nice to others and Pumbaa getting the fame and fortune he deserves.

The scene cuts to Timon giving away all his belongings to the jungle animals, telling them that he is moving. Meanwhile, Pumbaa purchases different kinds of clothing. The warthog then goes to a different store purchases three various kinds of technology the store owner shows him.

After Timon gives away all his stuff to the animals, Pumbaa shows up in a limousine to find out how his friend is doing. Timon tells Pumbaa that he has an appointment with someone to help out.

The scene cuts to Timon feeding an elderly meerkat named Bernice. Bernice tells Timon that she has never seen the world for all her life, making the younger meerkat decide to make her do so. Timon takes Bernice to the pyramid and then the top of Mount Everest, where they run into Pumbaa, who asks Timon if he wants to ski down the mountain with him. Timon replies that he has to continue taking Bernice around the world.

Pumbaa continues trying to get his fame and fortune. He first becomes a daredevil, then he tries to swim with sharks, and then he plays a game of Billionaire at a casino.

Meanwhile, Timon is at a field painting the background he’s seeing. While he’s enjoying the nature, Pumbaa comes out of a helicopter, saying to the women he was accompanied by, deciding to spend his last moment with his friend. After Timon and Pumbaa give each other some goodbye gifts, it is time for them to expire. However, when the time is up, Timon and Pumbaa are still alive. Timon rereads the book and sees that it says that the poison has no effects on meerkats and warthogs, making the duo rejoice. But then Timon realizes that since they are not dying, he wasted his day doing charity work for nothing while Pumbaa realizes that he has to pay all the bills he received.

Pumbaa tells Timon that instead of spending the whole day buying “meaningless junk”, he could have spend the day with his friend and the two share a hug. 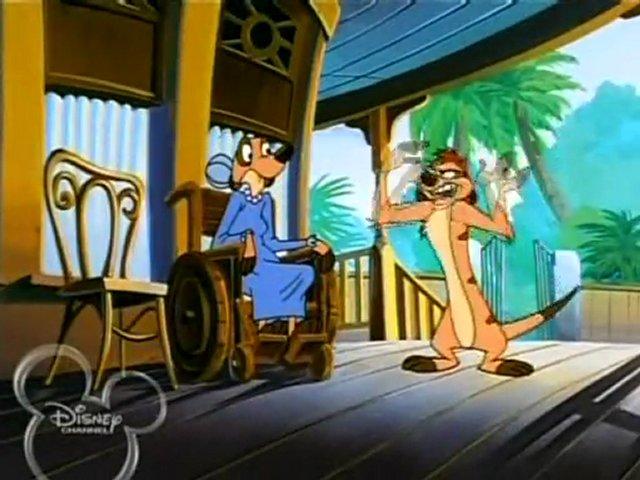