Muhimu's herd is a group of zebras. They live in Mbali Fields, a grazing ground on the edge of the Pride Lands.

When Muhimu and her herd get into a fight with Swala and her herd, the Lion Guard rushes to put a stop to the argument. Once there, Bunga gets sat on by an actively fighting Muhimu, who continues squabbling with Swala until Kion steps forward, roaring for silence. With the herds now paying attention, he and Beshte point out that the grazing grounds in the Pride Lands are open to everyone, but Muhimu and Swala explain that there's only one small patch of grass left for them to share.

Eventually, the herds make it to a canyon, where Kion attempts to encourage the gazelles and zebras through their fatigue and hunger. Ono then assures Kion that they're close, though he voices his worries about an oncoming storm. As the herds pause to behold Mbali Fields, Muhimu loses patience and begins to charge down the canyon with her herd. Not to be outdone, Swala and her gazelles tear after them.

A frantic Lion Guard attempts to stop them, but, too late, a huge pile of rocks falls into the midst of the canyon, blocking the way into Mbali Fields. As more rocks continue to fall, Bunga leaps onto Muhimu, rescuing her, and she realizes that he has just saved her life. Meanwhile, Kion realizes that they must scout out another route, for the rocks are unmovable. Ono rushes to fulfill this new command, but when he returns to Kion, he admits that the only other way to Mbali Fields takes them through the Outlands. Grimly, Kion accepts their fate.

As the herds set out, the storm breaks over the canyon, and the combined herds begin to complain about Kion's leadership. No sooner have they finished griping when a flash flood forces the herds to race to higher ground. While Ono leads the herds to higher ground, Kion and the rest of the Guard rescue those still trapped in the rising waters, including Muhimu, who finds herself in Bunga's debt once more.

Once the herds are safe, they begin to complain about Kion, criticizing his choice to take them through the canyon. However, Muhimu speaks up and takes the blame for starting the stampede. She then promises to make things easier from now on, and Kion thanks her for her loyalty.

Thanks to Muhimu's words of encouragement, the herds trust Kion to lead them into the Outlands. However, just as they've entered the Outlands, Muhimu begins to go into labor, and Kion is forced to make a difficult choice. While he sends Beshte, Fuli, and Ono ahead to keep leading the herds, he and Bunga stay behind to help Muhimu give birth.

Under the careful watch of Swala and several others, Muhimu gives birth to a son. No sooner has the zebra foal been born when he emits a loud bray, which attracts the attention of Janja and his minions, Cheezi and Chungu. The three plunge down the ridge in the hopes of scattering the gazelles and zebras, but Kion orders them to protect Muhimu and her foal while he and Bunga take on the hyenas.

Together, Bunga and Kion distract Cheezi and Chungu, but Janja manages to break through their defense to attack the zebras. However, he is kicked in the face by Muhimu's foal, and the hyenas scramble to get away, having been bested by the herds' teamwork. With the hyenas defeated, the Lion Guard leads the rest of the gazelles and zebras home, where Bunga plays happily with Muhimu's foal.

Reirei and her family plot to attack a herd of zebras. Nearby, Kion picks up the pack's scent, and the Lion Guard rushes to rescue the zebras from their attackers. Too late, the pack strikes, and Reirei's children, Dogo and Kijana, manage to isolate a young zebra named Hamu from the rest of the herd. Ono spots the double attack, and Kion orders Bunga and Ono to save Hamu while he, Beshte, and Fuli rescue the remainder of the herd.

Dogo tricks Hamu into stopping for a game of tag. Just in time, Ono warns Hamu of the trap, and Bunga tackles Kijana to the ground. Dogo makes a last attempt on Hamu's life, but Bunga yells at Hamu to kick Dogo, and the colt follows through on Bunga's advice, successfully fending off Dogo.

At the same time, Kion stops Reirei from harming the rest of the herd, and Muhimu realizes that she had lost her son, Hamu, in the panic. Hamu promptly arrives alongside Bunga, who deposits Dogo and Kijana at their mother's paws. Reirei tries to blame Hamu for harming Dogo, but Kion exiles her back to the Outlands, and the jackals take off for home.

With the danger abated, the Lion Guard moves to depart, but Muhimu begs them to stay and watch over the herd. Beshte suggests that she take some time for herself, but Muhimu reminds him that she has her son to attend to. Just then, she notices Bunga playing with Hamu and suggests that he take care of her son for the day. To Muhimu's relief, Bunga agrees to the task.

Muhimu's herd is seen being circled by a flock of vultures until they are led to safety by Ono.

At Mizimu Grove, Rafiki and Simba announce Makini's mpando mpaya, and Timon and Pumbaa perform their song ("Tujiinue"). In the midst of the celebration, the Army of Scar attacks, and the Pride Landers rise up to defend themselves. The battle pauses when Scar appears in the flames and threatens to overtake the entirety of the Pride Lands. Frightened by Scar's unexpected appearance, the remaining Pride Landers, including Muhimu and her herd, flee Mizimu Grove.

At Pride Rock, Kion implores Muhimu and her herd to follow him to Mizimu Grove before they decide to leave the kingdom. The herds follow Kion to Pride Rock, where Makini's baobab tree seed has survived the fire. This inspires the Pride Landers to remain in the kingdom and work together to defeat Scar. 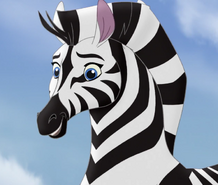 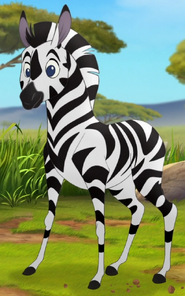 Hamu
Add a photo to this gallery
Retrieved from "https://lionking.fandom.com/wiki/Muhimu%27s_herd?oldid=295705"
Community content is available under CC-BY-SA unless otherwise noted.