A mad scientist named Dr. Cagliostro, who is ready to begin his experiments after years of preparation, asks his monster assistant, Torgo, to bring Timon and Pumbaa to him. The scientist tells Timon that he's going to turn the meerkat into the world's most beautiful creature. Timon, however, tells him that he's already beautiful, but that Pumbaa could use some improvements. Cagliostro therefore throws Timon into a cage.

Pumbaa becomes excited about becoming beautiful, and Torgo puts the warthog into a machine called The Metamorphitron. After the machine does its work, Timon, Dr. Cagliostro, and Torgo see that Pumbaa turned into an ugly creature with bulgy eyes, crooked buck teeth, his front feet looking like duck feet, a rat tail, and legs of a man.

Meanwhile, when Pumbaa is saddened by his ugly form, Timon tells his friend that beauty is only fur deep and it's what is inside that counts. Timon and Pumbaa then try to find a way to push the cage button to get out of the cage. Timon grabs his suitcase and takes out a boomerang. Pumbaa says that using a boomerang is not a good idea as it would come back and hit Timon in the head, but the meerkat doesn't listen. Timon throws it and it hits him in the head, showing that Pumbaa was right but he claims that he just didn't throw it hard enough. When the meerkat throws the boomerang again, the boomerang goes back and hits a laser that barbecues Timon and Pumbaa, and then the boomerang hits Timon in the head again.

Timon uses some darts to hit the cage button. Every darts Timon used missed the button and Timon only has one more dart to use. The last dart hits the button, but it turns out the button makes a bigger cage fall down instead of making the cage open. Pumbaa then gets an idea and makes a magic trick, making the two cages disappear.

Pumbaa goes inside the Metamorphitron to change back to his normal self. But while Timon helps him, he runs into Torgo and tries to find a place to hide. Pumbaa makes the meerkat hide in the Metamorphitron. Pumbaa is now changed back to normal, but unfortunately Timon turned into an ugly creature with green hair that goes up, a red nose, a sharp knife-like bone on his back, a tail of a rooster, and legs of a fowl. Torgo catches Timon and Pumbaa, then Timon makes a Number 3 plan to get Torgo on their side so he can be changed back to normal.

Timon and Pumbaa convince Torgo that Dr. Cagliostro will soon replace him with another monster. This causes Torgo to get upset and destroy everything in the laboratory. Torgo first destroys the Metamorphitron while Timon tries to stop him because it's the only thing that can change him back to normal. Dr. Cagliostro catches Torgo destroying the Metamorphitron and tries to stop him as well.

The laboratory gets destroyed and Torgo turns into a beautiful woman while Timon is back to normal. Dr. Cagliostro gets a crush on the female version of Torgo and two are going to get married. However, when Dr. Cagliostro and Torgo leave, it turns out that Timon and Pumbaa are mutated together, with Timon and his upper half as Pumbaa's tail, Timon's hands as Pumbaa's front feet, and Pumbaa (all except for his head) in Timon's colors. 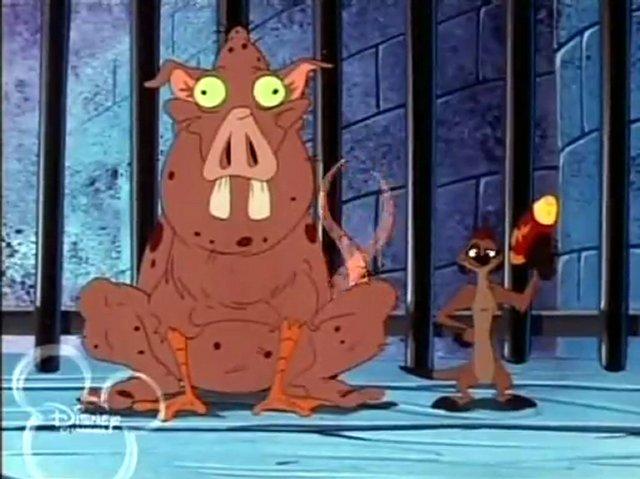