"Timon's mum is coming to visit. She doesn't approve of his lifestyle, so Timon decides to make it look like he's changed his ways."[1]

After Pumbaa eats a bowl of ants, Timon tells his friend that his mother received a telegram saying that she will visit him and that she expects him to become a responsible contributing member of the meerkat society. He tells Pumbaa that he purchased a brief case saying that he has a great job, he built a house on a tree, and now he has to make Pumbaa pretend to be his wife. Pumbaa refuses to dress up like a woman until Timon reminds him that he says that he would do anything for Timon.

Pumbaa is now dressed like a woman and Timon names his wife Patty. Timon tells Pumbaa that no matter what, Pumbaa is Patty and not Pumbaa. Someone rings the doorbell, Pumbaa answers and it's a lawyer who wants to give Pumbaa money, but the warthog says that he's not Pumbaa and closes the door. Timon then tells his friend that he's only Patty when it is his mother, not someone else.

The doorbell rings, Timon answers and it is his mother. Timon introduces Patty (Pumbaa as Timon's wife) to his mother and shows her the brief case and the house. He then tries to make his mother leave, telling her that he's fine and that she doesn't need to worry about him. But Ma gets back inside and asks his son and "Patty" to show her their wedding picture, which they reply that they dislike it.

Ma then talks to the two about Iris' wife being slim, having an ability to sing opera while juggling and riding a unicycle, and being a great cook. "Patty" does everything Ma mentioned to convince her that "she" is a perfect wife for Timon. Ma, however, doesn't believe so and suggests that she should move in with her son. But Timon tries to convince her that she would get lonely without her friends, but Ma suggests that she has to meet a rich old movie star, otherwise she will live with Timon forever. Hearing Ma's words, Timon decides to make Pumbaa disguise as a rich movie star and when reminded once again that he said he'll do anything for Timon, Pumbaa agrees.

Pumbaa gets to the front door, disguised as a movie star named Patrick. When he enters, he pretends that he is interested in marrying Ma. Ma agrees to marry him but she is too worried about Timon, making her son replying by insisting that she leaves him with "Patty." Ma then tells Timon that she will leave him only if she gets to meet "Patty's" entire family. Therefore, Timon has to make Pumbaa disguise himself as the said family.

Pumbaa plays Patty's mother and father. When things go tiring for Pumbaa when Ma keeps insisting to meet the rest of Patty's family, the warthog gets fed up and tells Timon's mother who he really is. Ma then gets angry at Timon and forces him to tell her the truth, which he does. When Ma replies that it is okay for Timon to live a Hakuna Matata lifestyle, it turns out that she is actually Fred in disguise and that it's April Fools' Day. In revenge for Fred's practical joke, Timon and Pumbaa put Fred in a rocket and send him to the moon. 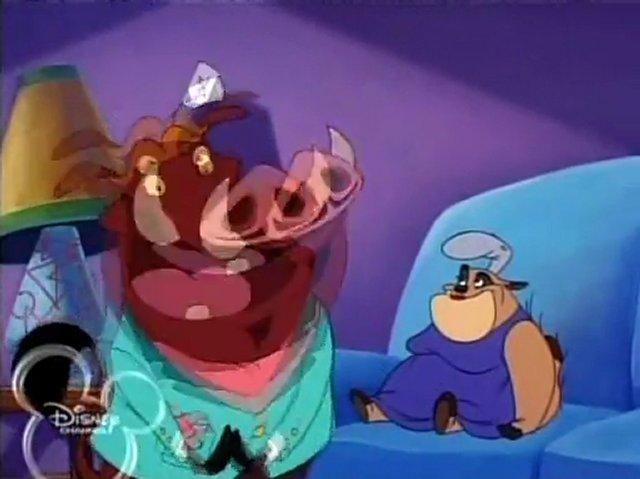 Retrieved from "https://lionking.fandom.com/wiki/Mombasa-In-Law?oldid=296555"
Community content is available under CC-BY-SA unless otherwise noted.