"Timon and Pumbaa save a rabbit from drowning in quicksand, which results in endless and overbearing gratitude."[1]

Timon and Pumbaa are walking in the Mojave Desert, with Timon searching for a dessert as he believes this is what the name means. Pumbaa corrects his friend that they are at a desert, but Timon still doesn't understand. The two see a pink rabbit drowning in a quicksand. Timon asks the rabbit if he has seen any dessert and the rabbit responds by telling him that there is no dessert in a desert. Timon wants to leave, but Pumbaa suggests that they save the rabbit first. Timon walks away, but then sees Pumbaa drowning in the quicksand as well. Now it's up to Timon to save the two. After saving the rabbit and Pumbaa, the rabbit thanks the two and Timon and Pumbaa begin to leave.

Later on, the rabbit continues waiting on Timon and Pumbaa hand and foot, such as cleaning the ground as Timon and Pumbaa are walking, being the two friends' waiter, and putting a rug and using bricks as an escalator on a mountain so Timon and Pumbaa won't slip and fall. This makes Timon realize that the rabbit refuses to leave them alone.

Later that night, Timon, Pumbaa, and the rabbit are sitting next to a campfire, with the rabbit once again telling the two his story about almost drowning in quicksand until they came to his rescue. Tired of listening to the same story over and over again, Timon pretends that it's time for them to sleep, secretly planning on him and Pumbaa to sneak away from the bunny while he's asleep. While doing so, Pumbaa says that they should have probably left the rabbit a note and Timon says, "Yeah, something like Dear annoying overbearing bunny, you nearly drove me bonkers, love and kisses Timon."

Timon and Pumbaa run into the rabbit, who thinks they were sleepwalking. The rabbit tells the two that they are "life-long friends" and says that they're going to be together forever. Timon and Pumbaa try to come up with an idea to make the rabbit stop annoying them. The next morning, Pumbaa finally gets an idea to make the rabbit save his and Timon's life so that they can be even and he will no longer annoy the two. Timon says that it's a bad idea at first, but then takes it as if it is his idea.

Timon ties Pumbaa with a rope while he's on the warthog's tummy. The rope is hanging from a tree, which is right next to a cliff and Timon and Pumbaa are above sharp rocks. Timon lights fire on the rope and then the two yell "help". The rabbit rushes to them and the two pretend that they need his help to rescue them. But the rabbit realizes what's going on and walks away. The rope rips apart and Timon and Pumbaa fall. Fortunately, the rabbit places a giant glass of water on the rocks for the two to land safely. The rabbit then tells Timon and Pumbaa that he would never let his "new life-long friends" meet their dooms and he'll protect them forever, much to their discomforts. 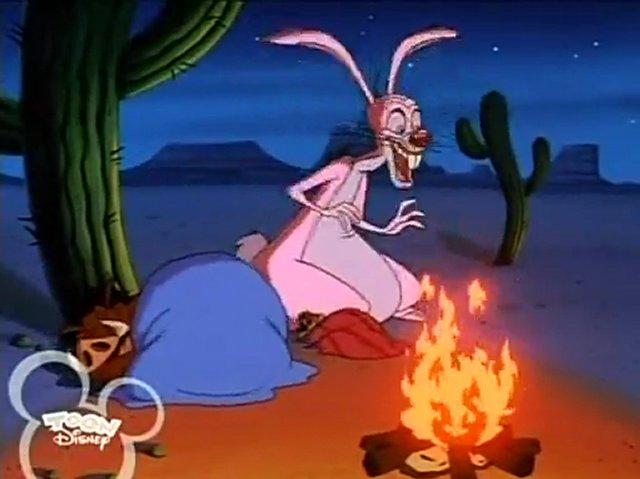 Retrieved from "https://lionking.fandom.com/wiki/Mojave_Desserted?oldid=296547"
Community content is available under CC-BY-SA unless otherwise noted.