Mheetu is a male lion. He is the younger brother of Nala. He is a deleted character from King of the Jungle.

King of the Jungle

Mheetu was present in an earlier draft of the film when it was called King of the Jungle. He was created by Linda Woolverton, specifically so Nala, his older sister, could protect him from the deadly clutches of Scar and his hyenas.

This idea was dropped because Woolverton felt that the film had gotten too dark after Mufasa's death. Also, she didn't know how to go about animating a concentration camp. Thus, this idea was dropped, and they decided to focus on Simba and his new friends instead of Nala and her brother.

Before Scar murdered Mufasa and took over the Pride Lands, Mheetu was a part of Nala's (then Nadra's) gang alongside a bat-eared fox named Bhati, while Simba's gang consisted of Timon and Pumbaa (then named Harold). The gang often played Kopje, "King of the Hill" in English, according to the Laserdisc.

All of these characters were originally scripted to grow up around the prince as childhood friends. Why this idea was scrapped is unclear. However, it's likely that some characters, like Timon and Pumbaa, were needed, and were better fit to be introduced later. Other characters, like Mheetu, really had no purpose, and were thus removed entirely. Also, with so many characters around, it would be difficult to focus on the main character, Simba.

Mufasa and Simba save Mheetu

While Mheetu was still a cub, Scar, a rogue lion at the time, managed to lure Mheetu into a wildebeest stampede in the gorge. His real intentions were not to have Mheetu killed, however, but adolescent Simba. Simba risked his life to save Nala's brother, but it was Mufasa who ultimately rescued the two from their doom.

From his concepts and previous places in the story, Mheetu is shown to be gullible, innocent, and playful. The Laserdisc claims that Mheetu is constantly getting into trouble.

Mheetu is mentioned in the Laserdisc release (Side 2, Disc 1) 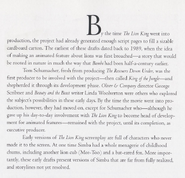 More information about Mheetu
Add a photo to this gallery

Retrieved from "https://lionking.fandom.com/wiki/Mheetu?oldid=290208"
Community content is available under CC-BY-SA unless otherwise noted.