"Timon and Pumbaa arrive on a desert island thinking they've landed in New York City and meet a castaway posing as a tour guide."[1]

While an airplane is flying through a storm, one of the crew, whose name is Jim, warns the pilot that there is something stinky in the main cargo bay. The pilot suggests what he could do with the stinky cargo. Jim and his partner, Bob, go to the cargo bay and find out that the smell comes from a crate to New York City. The two men throw the crate out of the plane and the crate falls into the water and ends up on a deserted island.

Timon and Pumbaa come out of the crate, believing they're in New York City. However, they soon realize that they are being mistaken. Meanwhile, a man, who is a castaway, sees the two friends from a distance and finds them to be good to eat. He goes to his plane to get a cook book on how he can cook Timon and Pumbaa.

Timon presents the difference between New York City and a desert island. While Pumbaa suggests that they are stranded on a desert island, Timon believes that while they were in the ocean, they passed through a time warp that sent them to the history of Manhattan Island. As Pumbaa believes that to be too complicated to believe, he suggests that they should ask the castaway, who is standing right beside them.

The castaway convinces Timon and Pumbaa that they are in Manhattan Island and that he's one of the tour guides. Timon finds it suspicious that the man doesn't look like a tour guide, but a very hungry castaway. The castaway then disguises himself as a tour guide. He brings a pot, which he makes Timon and Pumbaa believe to be a cage, and tells the two that he will take them to Central Park. While Timon is excited, Pumbaa doesn't see the point of going to a place filled with trees since they already live in a jungle. The warthog wants to visit the actual city of New York and go to a broadway show. Timon agrees and asks the castaway to take them there.

Timon and Pumbaa try two attempts to help the castaway get off the desert island by using his plane, but these two attempts end in failure, with the plane getting destroyed in the second one. For the third attempt, Timon and Pumbaa built wings to put on the man. This attempt ends in success, as the man flies off the island.

While Timon and Pumbaa are proud of their success, they realize that they are still stranded on the island. While Pumbaa is unhappy about that, believing that they will starve to death, Timon tells his friend that they have survival instincts and therefore, they will be okay even if they're stuck on the island for 50 years. Little do they know, the island they are stranded on is located within' New York City, turning out that they're in Manhattan Island after all. 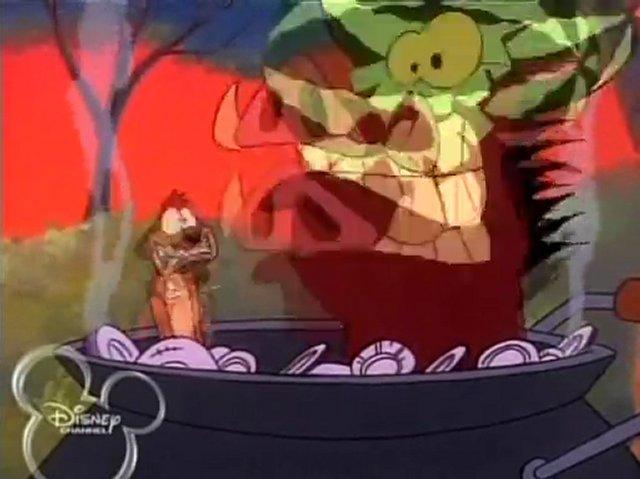 Retrieved from "https://lionking.fandom.com/wiki/Manhattan_Mishap?oldid=296557"
Community content is available under CC-BY-SA unless otherwise noted.