In The Lion King

Mandrills are portrayed very accurately in the film, aside from the fact that they have tails (something that was commented upon by Rafiki's animator, James Baxter, who called Rafiki "mutated").

In the beginning of the film, Rafiki, the most prominent mandrill, is revealed to be the chief adviser and close friend of the lion king, Mufasa. He is given the task of holding the newborn lion prince, Simba, before the rest of the Pride Lands, in order for the Pride Landers to bow before their future king. He anoints the cub and performs the initial rites of passage before holding him up before the gathered animals. Later on in the film, the audience is given a view of Rafiki's tree, the home of Rafiki. The trunk is covered with cave art, and hollowed-out skins of fruit are seen hanging from the tree branches. This furthers the fact that Rafiki is considered shaman of the Pride Lands.

Later, after Scar has usurped the throne and Simba is pronounced dead, Rafiki catches Simba's scent on the breeze. He travels a long distance from the Pride Lands until he reaches the jungle where Simba has been living all these years. Through wisdom and a bit of craziness, Rafiki further convinces Simba to return to Pride Rock and claim his kingdom. At the film's climax, Rafiki joins in the giant battle, using his stick to defeat the hyenas. At the very end of the film, he holds up Simba and Nala's newborn cub before the Pride Lands, continuing the tradition of the great Circle of Life.

In A Tale of Two Brothers, Rafiki is appointed royal adviser and teacher by Ahadi.

More is revealed about Rafiki's homeland, Grass Walls, in this book. After hearing news that his home is in danger, Rafiki sets out with Simba to save his kin. Upon reaching Grass Walls, he finds it barren and in horrible condition. He finds out from his friends and cousins that Jelani, the leader of the baboon troop, is slacking off in his job. With the help of Simba, Rafiki gains control of the troop and leads them to a new home. After they reach a lush jungle, their new home, Jelani admits his mistakes and regains leadership over the troop. 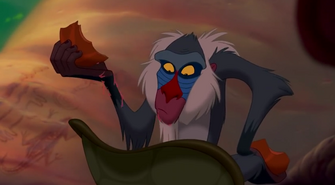 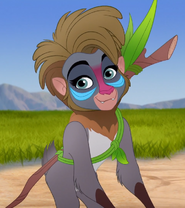 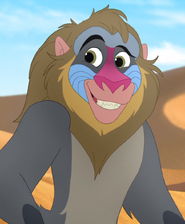 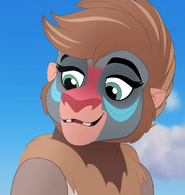