"Timon and Pumbaa learn their lesson about safety at the expense of Boss Beaver and his very flammable lumber mill."[1]

Timon and Pumbaa's job is to know about "Safety First." Timon wants to get the job over with so he and Pumbaa can leave, but Pumbaa says that they should read the instructions first, but Timon says that they just have to push a button labeled "Start". Pumbaa reads the first rule of the instructions, which says, "Do not push the button labeled start," causing the button to explode on Timon, which Boss Beaver considers to be a 47th safety regulation violation. Pumbaa now reads the 100th rule of the instructions, saying that Timon can now push the start button, which he does, but the rule also says that he should stand on the right side of the line, making Timon realize that he's standing on the wrong side. This causes a big safe to fall on Timon, making it be the 48th violation of safety regulations.

Pumbaa is now turning logs into paper, while an exhausted Timon wants to take his nap. The meerkat hops on one of the logs and takes a nap on it, but Pumbaa tells his friend that sleeping on the job is unsafe. Timon, however, doesn't listen and he gets turned into toilet paper himself, which Boss Beaver says that it is the 49th violation of safety regulations.

After Timon puts 49 pennies in Boss Beaver's jar and only has one penny left, the beaver lets Timon and Pumbaa go, warning them not to let him catch them being unsafe again. When Timon and Pumbaa are about to leave the lumber mill, they come across a door which Timon believes to be a fire escape. The fire escape, however, turns out to be a furnace as fire comes out of the door when Timon opens it. When he closes the door, the fire gets on a barrel. Timon tries to hide the fire from Boss Beaver by putting the barrel in different rooms, but the rooms are unsafe as well. When Timon puts the barrel in the last room, fireworks come out. Boss Beaver comes out of his office to find out what's going on, believing that he heard fireworks, which Timon and Pumbaa deny that there are any fireworks in his lumber mill.

After Timon sends Boss Beaver back into his office, one of the fireworks gets inside the office, and catches the boss. When Boss Beaver gets flown up to the top of his lumber mill, the fireworks cause a fire, with Boss Beaver in danger. Timon and Pumbaa rescue Boss Beaver and the three safely escape the lumber mill, which burns down, causing Boss Beaver to lament. Timon apologizes to Boss Beaver, telling him that he is responsible for the fire and that he learned his lesson about safety. The meerkat then puts his last penny in Boss Beaver's safety jar. 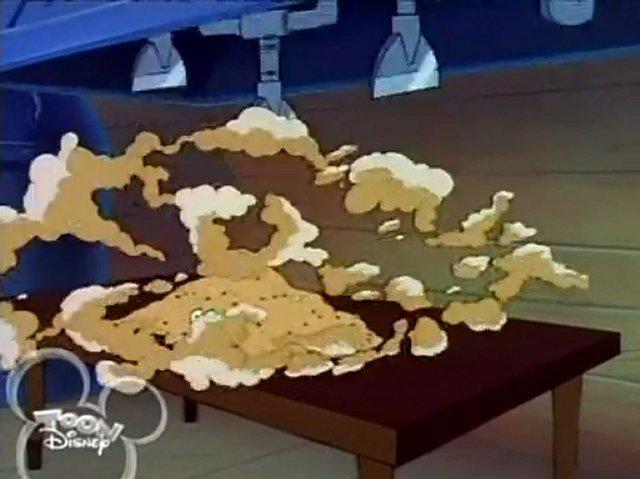 Retrieved from "https://lionking.fandom.com/wiki/Maine-Iacs?oldid=296583"
Community content is available under CC-BY-SA unless otherwise noted.