Ma Tembo's herd is a group of elephants from The Lion Guard. They live in Kilio Valley, a valley in the Pride Lands.

An elephant calf from Ma Tembo's herd squirts Bunga with water during the "Don't Make a Stink" musical sequence. Later, the herd watches the mashindano between Makuu and Pua. Afterward, Ma Tembo's herd gets forced into a different grazing ground due to Makuu upsetting the kingdom's habitats. The issue is eventually resolved, with the herd returning to the watering hole.

"Can't Wait to be Queen"

When Aminifu, the leader of the herd, passes away, Simba is invited to give a tribute at his funeral. Before leaving the Pride Lands, Simba explains to his cubs, Kiara and Kion, how Aminifu had led his herd back into the Pride Lands after the defeat of Scar, which helped put the Circle of Life back into balance.

Along with Nala and Zazu, Simba sets out on a journey to Kilio Valley, the home of the elephants. Just before leaving, Simba worries over setting his daughter, Kiara, in charge of the Pride Lands, but Nala corrects him that he's really worried about giving a speech in elephantese. Zazu adds that it's a very important tradition to the elephants.

Eventually, the three reach Kilio Valley, where they see Ma Tembo's herd paying tribute to their old leader by placing flowers on his body. Simba strides down the ridge, and the ceremony begins, with Ma Tembo, Aminifu's daughter, announcing the king as a special guest.

With the herd watching rapturously, Simba recounts his long friendship with Aminifu and how he will remember the old elephant fondly. However, when Simba tries to give the standard elephantese tribute of "He had good on him," he accidentally says, "He had poop on him." Despite the king's horror at such a mistake, the herd laughs, and Ma Tembo explains that Aminifu always used to have excrement on him, which had incited much laughter from the herd. She then thanks the king for his kind words.

Zito and other members of the herd can be seen walking across the savanna when Ono runs into Mwoga.

"Bunga and the King"

When the elephants hold their first concert of the season, Simba and his family resolve to be in attendance. However, along the way, Simba gets trapped in a sinkhole, and Kiara and Nala are forced to go on without him. They witness the concert and praise the elephants after their song, but just then, Simba arrives with the Lion Guard, Pumbaa, and Timon. Once there, he apologizes to Ma Tembo for being late, and they all perform "Hakuna Matata" together.

The herd dutifully follows their leader, Ma Tembo, as she searches for a water source in the Pride Lands. When Ma Tembo finally locates water, the herd drinks happily.

When Chama, a rambunctious young elephant, proves to be too much of a handful for the herd, Ma Tembo kicks him out.

Later, Kion encourages Ma Tembo to take Chama back, and she agrees to give the young elephant one last chance with the herd. However, the herd soon tires of Chama's antics, and, seeing their frustration with him, Chama leaves the herd for good.

Ma Tembo's herd takes part in the Ukumbusho Tradition, a celebration that honors the peace established between the elephants and lions of the Pride Lands.

The herd takes part in the "The Twelve Ways of Christmas" performance.

"The Wisdom of Kongwe"

Two members of the herd appear during the musical sequence "The Faster I Go".

When Kilio Valley catches fire, the Lion Guard enlists the help of Ma Tembo and her herd. Despite their efforts, the fire devastates the valley, and the elephants are forced to leave.

Kion, the leader of the Lion Guard, attempts to find the herd members a new home, but the other Pride Landers reject the elephants because of their foreign, disruptive behavior. Ma Tembo resolves to lead her herd out of the kingdom, to Kion's disappointment.

The Lion Guard concludes that the Pride Landers must unite against the threat of the Outlanders. They gather together Bupu's herd, Laini's group, Ma Tembo's herd, and Mbeya's crash ("Pride Landers Unite!").

At first, the Pride Landers are tense, but Kion works to defuse the tension. He instructs the animals to race toward Bunga. However, the event soon gets out of hand, for the animals trip over the galagos and end up in a heap. Kion then gets the idea to call Makuu the crocodile for help. Makuu begrudgingly agrees to help, but his training is too rigorous and ruthless for the other Pride Landers to master.

After the fight, Makuu thanks the herd for their help and vows to do the same for them should the need ever arise.

Ma Tembo's herd is present when Dhahabu arrives at Pride Rock to discuss a water treaty with Simba.

At Mizimu Grove, Rafiki and Simba announce Makini's mpando mpaya, and Timon and Pumbaa perform their song ("Tujiinue"). In the midst of the celebration, the Army of Scar attacks, and the Pride Landers rise up to defend themselves. The battle pauses when Scar appears in the flames and threatens to overtake the entirety of the Pride Lands. Frightened by Scar's unexpected appearance, the remaining Pride Landers, including Ma Tembo and her herd, flee Mizimu Grove.

Kion uses the Roar of the Elders to defeat the Outlanders, while Simba deliberates what to do with Ma Tembo. Simba then approaches the Pride Landers once the Lion Guard has calmed them and admits that he has had knowledge of Scar's return for some time. Ma Tembo notes that she understands why he'd kept it a secret. The herds deliberate whether they should leave the Pride Lands, and Simba tells them to inform him of their decision the following morning at Pride Rock.

At Pride Rock, Kion implores Ma Tembo and her herd to follow him to Mizimu Grove before they decide to leave the kingdom. The herds follow Kion to Pride Rock, where Makini's baobab tree seed has survived the fire. This inspires the Pride Landers to remain in the kingdom and work together to defeat Scar.

The herd can be seen during the musical sequence "Height and Sight".

Ma Tembo's herd arrives at Pride Rock to train for the battle against Scar and his army. They witness Scar's spirit rising in the flames of Pride Rock, and Ma Tembo worries that Scar knows what they are planning.

The next morning, the herd participates in the battle, and the Pride Landers emerge victorious.

Later, the herd bids farewell to the Lion Guard as they depart for the Tree of Life.

The herd witnesses the announcement of the Battle of the Lion Guards at Mizimu Grove. Later, Ma Tembo and Zito stand on rocks for Beshte and Imara to push during their competition. Imara ends up winning due to Beshte having to pause and care for his sunburn. The herd watches the other competitions, including Kion's final mashindano with Vitani. Later, they attend Kion's wedding to Rani at the Tree of Life. 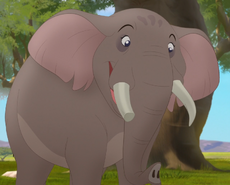 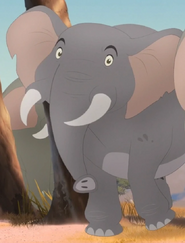 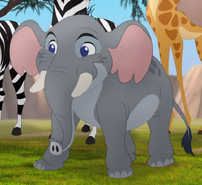 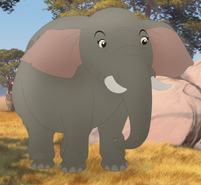 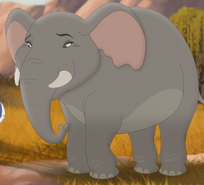 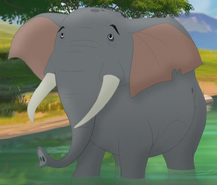 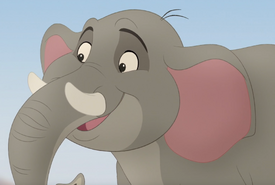