"Timon and Pumbaa go to the library in search of a bookworm."[1]

At the "Don B. Loud Library", while Rita Book, an elderly librarian, is at her desk reading a book, Timon and Pumbaa enter the library, with Pumbaa carelessly knocking down the "Quiet" signs, and Rita tells them to be quiet. Pumbaa is surprised by all the books and says that they are "a new world full of adventure." But Timon says that they're just here to catch a bookworm, which is hiding behind a book overhearing the two friends talking. Pumbaa tells Timon that a bookworm is not a bug, it's a person who loves reading books, but Timon shows Pumbaa an actual bookworm. When Timon and Pumbaa are getting ready to catch and eat the bookworm, Timon blows a horn and he is stopped by Rita, who warns them that if they make one more sound, "they will be history." The bookworm hits Pumbaa's foot with a mallet and Pumbaa flies across the room and lands on Rita's desk. Rita kicks Timon and Pumbaa out.

Timon and Pumbaa sneak back in and tie pillows on their feet in order to not be too loud while trying to catch the bookworm. When they find the bug on one of the book shelves, they blindly run into the shelf and several books fall on them. The bookworm replaces the pillows with horns and he makes Timon and Pumbaa go after him in order for the two to make noises with the horns. Rita catches them and hits them (offscreen) with a baseball bat.

Timon and Pumbaa sneak back in and put earmuffs on Rita. Timon shouts to check if the librarian can hear them, which it turns out she can't, meaning that Timon and Pumbaa can now make all the noise they want. The two start going after the bookworm. After the pursuit, Timon catches the bookworm, yet accidentally knocks a book shelf, which knocks every other book shelves, with Rita being oblivious to the chaos going on around her as she is so engrossed with her book. A book falls on Timon, Pumbaa, and the bookworm and the three get sucked into the world of books. The stories the three go to are Treasure Island, 20,000 Leagues Under the Sea, The Last of the Mohicans, A Christmas Carol, Tarzan, Gulliver's Travel, Peter Pan, War and Peace, Crime and Punishment, The Great Escape, Of Mice and Men, and Moby Dick.

When the three arrive at "Moby Dick," Timon finally catches the bookworm. When Captain Ahab tells them "Land will appear where there be no land," Timon becomes curious in knowing what Ahab is talking about and how the story ends, but Pumbaa says he never finished "Moby Dick" because of how long the story is. Moby Dick then comes out of the water and crashes the boat.

Timon, Pumbaa, and the bookworm are back in the real world and they find themselves in a hospital. The bookworm hops on a wheelchair and runs off and Timon and Pumbaa chase him. The three then run into Rita, who is now a nurse. Rita tells them to be quiet and the three quickly go back to their beds shaking. As the screen irises out halfway, the bookworm giggles, but Timon catches it and he and Pumbaa finally manage to eat it. 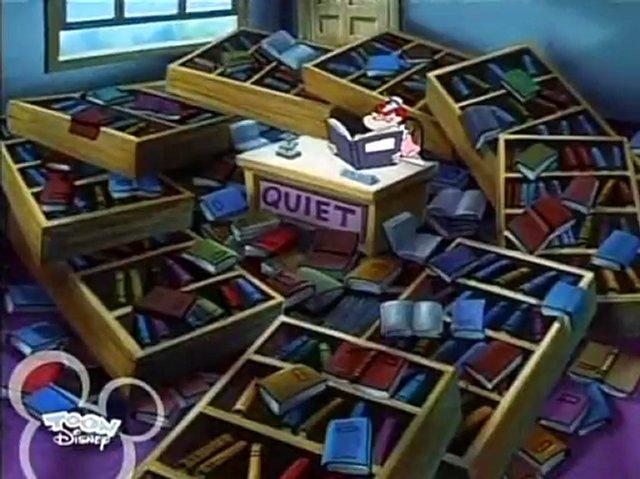