"Let's Serengeti Out of Here" is the first segment of the twenty-second episode of Season 1 of The Lion King's Timon & Pumbaa. It is the eleventh episode of Season 1 to air on the CBS Saturday morning lineup. It aired on December 9, 1995, along with "Congo on Like This".

"When Timon and Pumbaa are abducted into an Animal Sanctuary, they disagree over whether to stay or not."[1]

An overzealous biologist named Mr. Happy finds Timon and Pumbaa taking a nap. Believing they are endangered species, he takes the two friends to an Animal Sanctuary.

When Mr. Happy introduces himself to Timon and Pumbaa and explains his action, which is that the reason he thinks their endangered is because he has never heard of them, Timon tricks the young man into believing that he is endangered since he has never heard of him either. While Happy finds tries to find a sanctuary of his own, Timon and Pumbaa attempt to escape the wildlife preserve.

After all of Timon and Pumbaa's attempts to escape the Animal Sanctuary fail, Pumbaa, who was at first excited to be safe, suggests that he was right the first time, but Timon disagrees, telling him that the sanctuary would prevent them from going anywhere they want or doing what they want. Mr. Happy returns and tells the two friends that he did not find a sanctuary anywhere. Timon unintentionally admits that he was trying to get rid of him, which causes him to sob.

Happy tells Timon and Pumbaa that he created some activities they can do in the Animal Sanctuary. This makes Timon want to stay and accept living a new life in the preserve. Pumbaa, however, starts to feel homesick and wants to leave the sanctuary. Timon argues that they could do lots of things at the sanctuary and suggests that they should stay.

28 years later, Timon finally realizes that living in a fenced up environment isn't for himself and Pumbaa and agrees that they should get out of the sanctuary. Pumbaa comes up with an idea to distract Happy while they tunnel out of the preserve, which Timon, as usual, takes the credit for. Timon and Pumbaa use sacks of potatoes as dummies of themselves escaping the sanctuary. Happy and his dog, Happy Dog, chase the potato sacks as well as some other animals while Timon and Pumbaa tunnel out.

After their plan succeeds, Timon and Pumbaa are happy to relive their old lives. Mr. Happy and Happy Dog chase the sacks of potatoes and run into Timon and Pumbaa, who attempt to escape him as they are worried that he will force them to live at the wildlife preserve again. 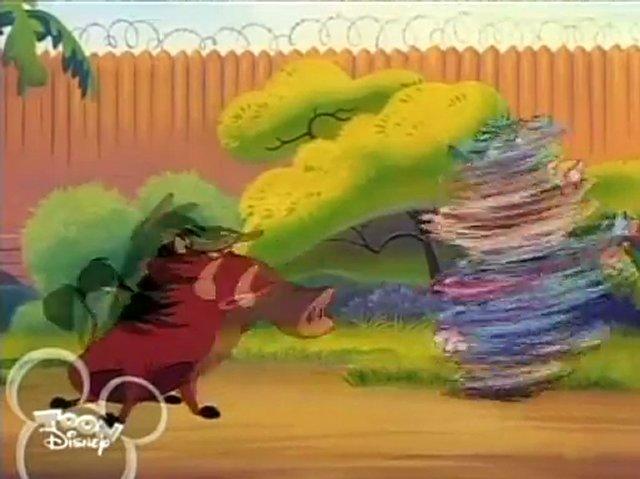 Retrieved from "https://lionking.fandom.com/wiki/Let%27s_Serengeti_Out_of_Here?oldid=296559"
Community content is available under CC-BY-SA unless otherwise noted.