"Klondike Con" is the first segment of the fourth episode of Season 2 of The Lion King's Timon & Pumbaa. It is the third episode of Season 2 to air on the syndicated Disney Afternoon block. It aired on September 16, 1996, along with "Isle Find Out".

"Timon and Pumbaa meet up with Courteous Quint, the nicest man in the Arctic. Or is he?"[1]

Timon and Pumbaa are mining for gold in the Klondike, with Pumbaa asking Timon why they haven't brought any tools to do so. Timon tells his friend that gold mining is simply picking up the gold and saying "This is mine." As they are about to continue their journey, a strong wind blows and the two get frozen inside giant popsicles. Later, a man named Courteous Quint comes by and sees Timon and Pumbaa frozen. He rescues the two friends by licking the ice.

A couple of minutes later, Courteous Quint set up his camp with Timon and Pumbaa, now unfrozen, warming themselves up with blankets. Pumbaa thanks Quint for saving their lives, but Timon, however, doesn't trust the man because he is too nice. The meerkat then wonders what Quint is doing in the Klondike. Pumbaa suggests that they ask him, but Timon suggests that they have to be sneaky. Timon goes to Quint and starts a conversation that leads the man to reveal why he is at the Klondike, which is that he mining for gold as well. He then confesses to Timon and Pumbaa that while he was wandering the frozen tundra for 50 years, he hasn't found anything. After Quint shows the two friends his shovels and picks for digging up gold, Pumbaa gives the man a map, but Timon takes the map back, saying that he doesn't need his help. The meerkat then changes his mind after Pumbaa suggested that they should team up with him, saying that they can't dig up gold without his equipment.

Timon, Pumbaa, and Courteous Quint are now mining for gold. They come across a cave, assuming that there are lots of gold in there. Timon and Pumbaa rush to it, but then Quint stops them, warning them about a polar bear that could possibly inside the cave. He therefore suggests that they should let him enter the cave first. While Pumbaa agrees, Timon stops Quint from entering, telling him that he can't fool him with his politeness and decides that he should go in first, which he does. When he enters the cave, he discovers that it is filled with gold. Suddenly, a polar bear appears and eats the meerkat, who manages to get out of its mouth and run away from it. The polar bear chases Timon until they get to a dead end of the cave. Pumbaa and Quint rescue Timon from the bear.

After getting rid of the polar bear, the group is back outside getting the equipment. While Pumbaa praises Quint for his rescue, Timon, however, still refuses to trust him. While Timon, Pumbaa, and Quint are gold mining in the cave, rock piles are about to fall on Timon. Quint sees this and saves the meerkat from getting crushed by the rocks. Despite the man's rescue, Timon still doesn't trust him.

Timon, Pumbaa, and Courteous Quint are now at a swimming pool. Pumbaa asks Timon if he could bring the scissors, which the meerkat does by running around the pool with the scissors in his hands. He is then stopped by Courteous Quint, who warns him that he could possibly get seriously hurt if he runs around with scissors. Timon still refuses to trust Quint, making Pumbaa wonder why after he saved the meerkat's life four times. Timon replies by saying the reason Quint is saving his life is that he wants his gold. The meerkat then gets gold fever. Timon gives one gold to Pumbaa, then one for himself, then one for Quint, and then one for himself again. Quint suggests that Timon should just split the gold, but Timon puts all the gold in a bag.

Timon, Pumbaa, and Quint are about to go on icy ground. The ground then crumbles and breaks apart, with Timon falling with the gold, Pumbaa catching Timon but then falling, and Quint quickly catching Pumbaa by his tail. Considering how heavy and difficult Timon and Pumbaa are to lift with Timon holding the bag of gold, Quint tells Timon to throw the bag to him, but the meerkat refuses. Pumbaa tells Timon that he has to trust him and then reminds him about the times Quint saved their lives. Timon then reluctantly agrees throw the bag of gold to Quint. After Courteous Quint gets the bag thrown to him, it turns out that he is actually a gold thief named Claim-Jumper Quint. When a hook from a helicopter grabs on to Quint, he lets go of Pumbaa's tail, leaving Timon and Pumbaa to fall to their deaths.

Luckily, Timon and Pumbaa safely land in a big pile of snow. After Quint gets inside the helicopter, the helicopter goes inside a police aircraft and the police arrests the criminal. Pumbaa learns his lesson about trusting his friend, with Timon suggesting that they quit the gold mining business and not get involved with anything involving gold. They then change their minds after billionaire pops out of the snow and offers them a gold key to Fort Knox. 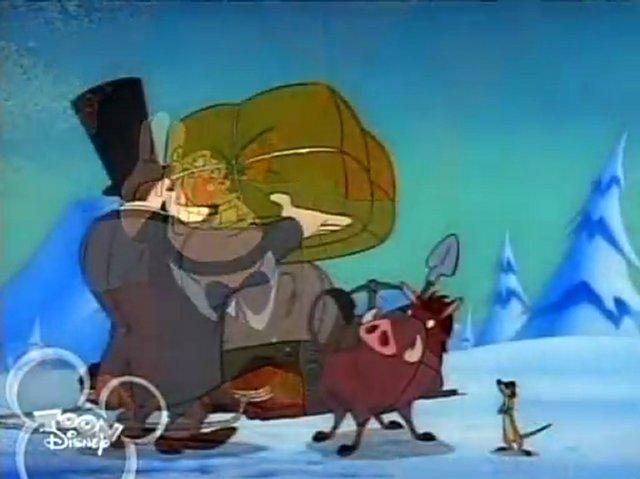