"Jungle Slickers" is the first segment of the seventeenth episode of Season 3 of The Lion King's Timon & Pumbaa. It aired on April 23, 1999, alongside "Don't Wake the Neighbear".

"Timon and Pumbaa try to be farmers in Kansas."[1]

Timon sneakily takes out a piggy bank filled with his and Pumbaa's life savings. When he sees that their life savings have been stolen, Pumbaa shows up and tells him that he took their money and used it for a trip to Kansas. Timon is angered by Pumbaa's action as he was saving their money for a trip to Manhattan because of the big cockroaches the city has.

When Timon and Pumbaa arrive at Kansas, Timon doesn't seem to like it there, so he decides to leave, but Pumbaa wants him to give the state a chance. Timon refuses to do so and walks away. Pumbaa then tells Timon that the reason they came to Kansas is because Pumbaa wanted to be a farmer. Timon then reluctantly agrees to stay after Pumbaa begs him to. Meanwhile, two farmers comment on the duo, stating that they may have seen them on TV.

On the next day, Timon and Pumbaa wake up and get ready for their jobs as farmers. Timon goes to the chicken barn, but the chickens mistake him for a criminal weasel and attack the meerkat. Meanwhile, Pumbaa tries to milk a cow, who helps Pumbaa by getting a carton of milk out of a refrigerator and pouring the entire carton in a bucket. As Pumbaa is about to leave with the bucket of milk, the cow wants the warthog to pay first, but Pumbaa doesn't have any money. So the cow kicks Pumbaa out and Timon gets kicked out by the chickens.

While Timon and Pumbaa try planting, Pumbaa sees that the bag is out of seeds and he and Timon see crows eating the seeds. The two place a scarecrow to scare the crows, but it doesn't work. So Pumbaa disguises himself as a scarecrow, but the crows aren't scared until Timon scares them away with a chainsaw. The crows then whistles at the chickens to attack Timon and Pumbaa.

Timon and Pumbaa now made a plant grow. While the two are proud of themselves for planting, a horde of bees shows up and eats the plant. The unhappy Pumbaa is about to give up his job as a farmer, but Timon has an idea on how they can become successful. Timon and Pumbaa then do farmer jobs while singing "Ol' McPumbaa."

Timon and Pumbaa sit on benches proud of themselves for the job they did. Two farmers show up to greet and thank Timon and Pumbaa. After the farmers leave, Timon and Pumbaa suggest they spend their lives as farmers until a rich lady in a limousine shows up and asks the two friends to accompany her to a penthouse in Manhattan that is infested with cockroaches, making the duo decide to give up their jobs as farmers to help her out. 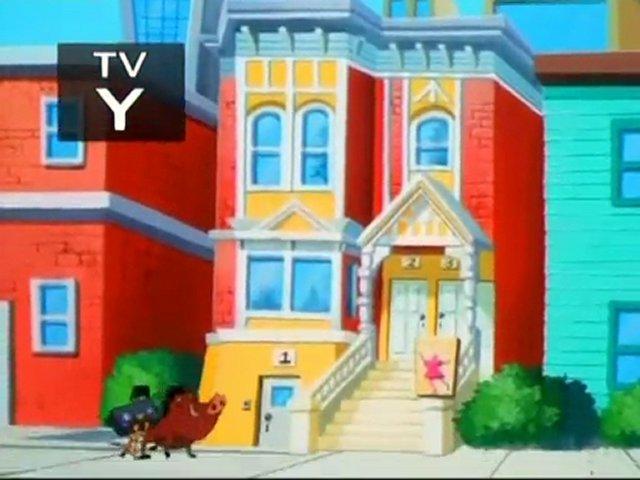