watch 01:45
The Loop (Movies)
Do you like this video?
Play Sound

Janja's clan is a former clan of hyenas who lived in the Outlands. They were led by Janja until they integrated into Jasiri's clan.

When Bunga and Kion lose their baobab ball in the Outlands, Bunga jumps down to retrieve it. It just so happens that Janja, leader of the hyenas, is watching from the shadows, and he orders his minions to bring him the honey badger. When the hyenas attempt to seize Bunga, Kion roars so loudly that the hyenas drop him, and he jumps to safety.

Later, Janja admonishes his minions for being scared of Kion's roar. Mzingo arrives in the midst of the argument and reports to Janja that Kion is assembling a new Lion Guard. Horrified, Janja resolves to take down all the animals he can and sings "Tonight We Strike" with his eager minions.

Not long after this, Kiara and Tiifu are stalking a herd of gazelles when they notice Mzingo circling overhead while Janja leads his clan into the heart of the herd. Suspicious, Kiara sends Tiifu to fetch her father while she stays behind to keep watch over the herd.

Just in time, the Lion Guard shows up and defeats the hyenas. Kion delivers the final blow by using the Roar of the Elders on Janja, who swears revenge before slinking back to the Outlands.

At the start of the episode, Janja and his cronies, Cheezi and Chungu, are chasing after a herd of oryx. Before they can take down the herd, the Lion Guard races to the rescue, chasing them off.

After Kion gets lost in the Outlands, he is led to Janja's territory by Jasiri. However, as Jasiri walks back through the Outlands, she is confronted by Janja, who surrounds her with hyenas. Kion, who is still in hearing range, overhears the confrontation and races back to Jasiri's aid, chasing the clan away with the Roar of the Elders.

"Can't Wait to be Queen"

When Kiara is left in charge of the Pride Lands, Janja takes advantage of the situation and sends Mzingo to offer a peace proposal. The vulture does as he's instructed and tells Kiara to meet Janja at Broken Rock, which serves as neutral ground between the Outlands and the Pride Lands.

Kiara agrees, but when she shows up at Broken Rock, Janja has brought his entire clan with him. Seeing this, Kiara attempts to flee, but her path is blocked by Cheezi and Chungu. A desperate Kiara begins to fight off the hyenas until Janja pins her down, but just in time, Kion arrives with the Lion Guard and drives the hyenas off.

Though the clan itself does not appear, Janja and his cronies, Cheezi and Chungu, give the Lion Guard frequent trouble. First, they start a stampede of wildebeests, but their plan is foiled by Ono. When Ono loses his vision in one eye, Janja takes advantage of this, and the three hyenas trap the Lion Guard in a ravine.

With Kion and his friends trapped, the hyenas attempt to feast on a herd of zebras, but Ono once again foils their plan when he warns the herd to leave, giving Kion the freedom to burst out of the ravine using the Roar of the Elders.

Janja and his clan can be seen chasing a young jackal pup named Dogo. However, when the Lion Guard comes to Dogo's rescue, Janja easily lets the pup go, and he and his clan race back into the Outlands.

When Bunga foolishly wanders into the clan's den, the hyenas surround him and attempt to eat him. Before this can happen, Fuli comes to his rescue, and the clan pursues them along a river of lava. Just then, the rest of the Lion Guard appears and defeats the clan, saving Bunga and Fuli from harm.

Janja and his clan attempt to pick off a herd of wildebeests while the Lion Guard is occupied elsewhere. However, Janja slips on mud and falls at the Guard's paws, giving his clan away. Furious, Kion uses the Roar of the Elders to banish the clan back to the Outlands, where Janja blames their failure on Cheezi and Chungu. He appoints Nne and Tano in their place, and the two new recruits chase Cheezi and Chungu away.

With Cheezi and Chungu gone, Nne and Tano makes plans of their own. They propose a plot to Janja in which they will bait the Lion Guard with a herd of stampeding antelope and then switch direction to attack a herd of oryxes. Janja, who is not usually bright enough to come up with such a plan, is impressed, and agrees to their plan.

The plan goes underway, and Nne and Tano force Janja to hide from the Lion Guard with them. Once the Guard runs off in pursuit of the stampeding antelope herd, the hyenas attack the herd of oryxes and start herding them toward a dead-end canyon. In the midst of the chase, Nne and Tano betray Janja, forcing him off the edge of a cliff, but before they can harm the herd, Kion stops them with the Roar of the Elders.

Janja and his clan flee the Pride Lands after being spotted by the Lion Guard. However, the moment the Guard is out of sight, Janja leads his clan back into the Pride Lands. Once there, they encounter Nala, the queen of the Pride Lands, who demands they return to the Outlands. Janja, however, threatens Nala and surrounds her with his cronies.

Kion and his team arrive on the scene, and Kion uses the Roar of the Elders in a rage to blow Janja and his clan back into the Outlands.

On Scar's orders, Janja and his clan attempt to intercept the Lion Guard as they make their way to the den for some volcano ash. The Lion Guard quickly gets past them.

Later, Scar rallies the clan and the rest of his army against the Lion Guard, but Kion uses the Roar of the Elders to clear an escape path, and the clan is defeated.

Janja and his clan repeatedly attempt to attack the Pride Lands, but fail each time. Later they launch a full attack on the Hyena Resistance with the rest of the Army of Scar, but they are defeated by the Roar of the Elders.

Scar sends Janja's clan and the rest of the Army of Scar on repeated attacks so as to trick Shujaa into destroying more of the Pride Lands. Eventually, the clan is repulsed for good by Shujaa and the Lion Guard.

Scar decides to attack Makuu's watering hole since the crocodiles' alliance with Kion is fraying. The Army of Scar, including Janja and his clan, besieges Makuu's float. Ono witnesses the battle and reports his findings to Kion. Together, the Lion Guard and their Pride Lander allies storm the watering hole and fight off the Army of Scar.

At Mizimu Grove, Rafiki and Simba announce Makini's mpando mpaya, and Timon and Pumbaa perform their song ("Tujiinue"). In the midst of the celebration, the Army of Scar, including Janja and his clan, attacks, and the Pride Landers rise up to defend themselves. The battle pauses when Scar appears in the flames and threatens to overtake the entirety of the Pride Lands.

Frightened by Scar's unexpected appearance, the remaining Pride Landers flee Mizimu Grove. Kion then uses the Roar of the Elders to defeat the Outlanders.

Janja's clan guards Kilio Valley. However, Janja begins to wonder if he should join Jasiri. The skinks overhear and report Janja's disloyalty to Scar.

Due to Janja's betrayal, Scar misleads Janja, lying to him that the Roar of the Elders can destroy him forever. He then sends the hyenas to lead the Lion Guard into the Lair of the Lion Guard as a distraction, while his minions set fire to the entrance, trapping them inside.

Janja manages to escape the fire, but his clanmates remain trapped. Janja implores Jasiri for help, while the Lion Guard leads the clan to safety through an underground water tunnel.

After the rescue, Janja tells the Pride Landers about Scar's information, unaware that it is a lie. The hyenas participate in the battle against the Outlanders. Afterward, Janja's clan joins Jasiri's, with Jasiri being named the queen of the Outlands. 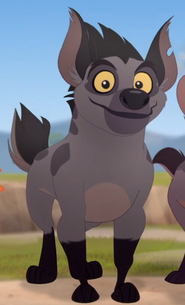 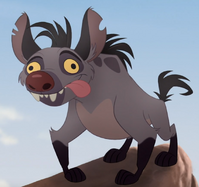 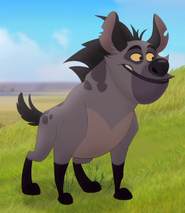 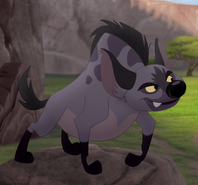 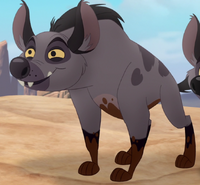 Tano
Add a photo to this gallery

Retrieved from "https://lionking.fandom.com/wiki/Janja%27s_clan?oldid=302137"
Community content is available under CC-BY-SA unless otherwise noted.