"Janja replaces Chungu and Cheezi with two new hyenas in an attempt to sideline the Lion Guard."[1]

After a rainstorm hits the Pride Lands, the Lion Guard patrols the kingdom for any signs of trail blockage. Unbeknownst to the team, Janja and his clan watch from the shadows, waiting for the Lion Guard to travel out of sight. Once they are gone, Janja attempts to ambush a herd of wildebeests, but mid-attack, he slips on the muddy ground and falls straight into the Lion Guard's paws. Though Janja attempts to lie his way out of trouble, Kion steps forward and uses the Roar of the Elders to banish him and his cronies back to the Outlands.

Once out of the Pride Lands, Janja blames Cheezi and Chungu for the trouble and orders them to leave the Outlands. He then recruits two other members of his clan, Nne and Tano, to force Cheezi and Chungu out of his territory.

Meanwhile, the Lion Guard continues to patrol the Pride Lands for blocked trails. During their search, they are caught in a mudslide and manage to escape to the sidelines. Once safe, they resolve to clear the now blocked trail from Big Springs to Mekundu Cliffs so that the other Pride Landers can use it once more. Kion orders Bunga and Ono to keep other animals from using the trail while he, Beshte, and Fuli clear scattered debris off the path.

Back in the Outlands, Janja tries to tell the new recruits that he is responsible for making all the plans, but the two interrupt him, declaring that they already have a plan. Janja listens in confusion as they explain their idea: together, the three will enter the Pride Lands and bait the Lion Guard with a stampede of antelope, and while the Lion Guard is busy, they will change direction and attack a herd of oryxes instead. Surprised at the ingeniousness of the plan, Janja agrees.

Across the savanna, Bunga and Ono manage to thwart Twiga the giraffe from using the blocked up trail, but a determined Thurston strides past them and gets trapped in the mud. Nearby, Cheezi and Chungu continue to flee from the Outlands. Once to safety, they lament being banished by Janja and attempt to be their own bosses, imitating Janja and calling themselves by his favorite nickname for them, "fur-brains." However, the act only succeeds in upsetting them, and in despair, Chungu sings "Chungu's Lament".

In the midst of the song, Cheezi and Chungu stumble upon a herd of antelope and attempt to attack them, but they accidentally bump heads and frighten off the herd. With the antelope gone, the hyenas decide to feast on leftovers instead. During the meal, the two are caught up in a mudslide, and the Lion Guard comes to their aid, rescuing them from the fast-flowing mud. Once the two are revealed to be Cheezi and Chungu, Kion sends Ono off in search of Janja, while Cheezi and Chungu explain that they are no longer affiliated with Janja.

Ono soon arrives with news that Janja is nowhere to be seen, and Kion orders Cheezi and Chungu to return to the Outlands without him. The hyenas protest, reminding Kion that they will just be kicked out again, and the other members of the Lion Guard point out that Cheezi and Chungu are too dumb to cause much trouble. Kion questions whether they will continue to attack the herds, but the hyenas declare that they only want to eat leftovers. Ono points out that this will benefit the Circle of Life, and Kion reluctantly agrees to let the hyenas stay in the kingdom.

After calming the herd, Kion voices his suspicion that a hyena is behind the stampede, as he had caught a whiff of hyena scent while pursuing the herd. He instructs Ono to find Cheezi and Chungu, who are sleeping in a lazy heap in the path of the stampede. The two are briefly run over by Janja, who denies wanting them back, but go back to sleep after Janja continues chasing the oryxes with his new cronies.

Janja eventually catches up to Nne and Tano, but the two decide to abandon him and force him off the edge of a cliff. Janja lands safely on a ledge, but finds himself trapped and abandoned by his former crew. Meanwhile, the Lion Guard finds Cheezi and Chungu, who deny having started the stampede, and overhears Janja yelling for Nne and Tano. The team takes off to investigate the situation, and Cheezi and Chungu pelt after them, excited at the prospect of seeing Janja again.

Once the Lion Guard locates Janja, they question him on why he had started the stampede, and Janja explains Nne and Tano's plan. As the Lion Guard goes to rescue the oryxes from the hyenas, Cheezi and Chungu bound down the cliff to join Janja.

At the end of the canyon, Nne and Tano trap the herd of oryxes and move in for the kill. Just in time, the Lion Guard arrives, and Kion uses the Roar of the Elders to force Nne and Tano away from the herd. Across the Pride Lands, Janja rejoices at the sound until the ledge beneath him gives way, and he and his cronies fall to the bottom of the cliff. The Lion Guard arrives to aid them, but Janja insists that he is all right and prompts Cheezi and Chungu to follow him. Overjoyed, the hyenas take off after their newfound master, and Beshte comments that he loves a happy ending. 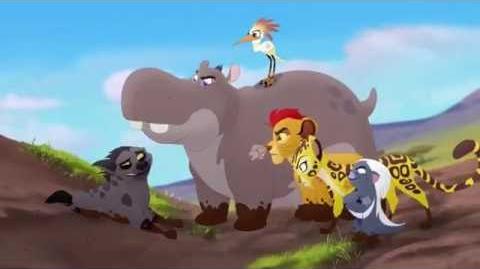 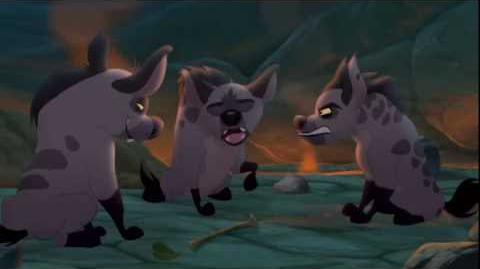 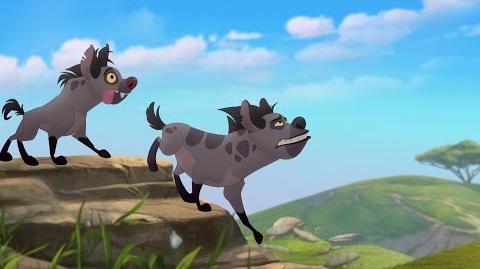 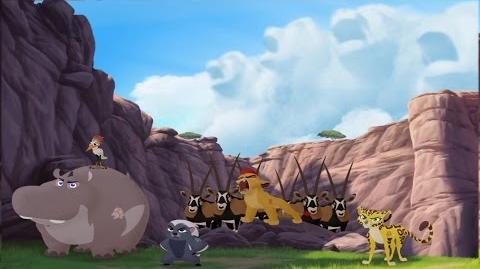 Retrieved from "https://lionking.fandom.com/wiki/Janja%27s_New_Crew?oldid=229526"
Community content is available under CC-BY-SA unless otherwise noted.