"Jamaica Mistake?" is the second segment of the first episode of Season 2 of The Lion King's Timon & Pumbaa. It aired on September 2, 1996, along with "Palm Beached".

"Timon and Pumbaa chase a bat into a nefarious, bloodthirsty vampire bat's house."[1]

Timon and Pumbaa chase a bat named Enos, whom Timon mistakes for a moth, that leads them to a haunted mansion owned by a vampire bat named Mr. Vam Pirebat. After Enos gets in the mansion, Timon wants to keep going after it, but Pumbaa's too scared to go inside.

So Timon leaves the warthog outside and walks inside the mansion. Pumbaa starts fearing about the vampire bat and Timon's safety, and after a skeleton head on Mr. Pirebat's mailbox mocks him, Pumbaa runs inside the mansion to find Timon.

After Timon and Pumbaa find each other, Timon makes each one of them go separate ways to find Enos. Pumbaa finds the bat and Timon chases him. Enos then pulls a lever that makes Timon fall down and land on a chair. Timon hears a voice and sees Mr. Pirebat.

Meanwhile, Pumbaa looks for Timon and runs into Enos. The bat pulls the lever and makes Pumbaa fall down and land on the same chair. The warthog then sees glowing eyes coming towards him, which turns out to be Timon, who is happy to find his friend.

Pumbaa wants to leave, but Timon likes the place because it has a lot of sandwiches with bugs. The meerkat introduces his friend to Mr. Pirebat. Mr. Pirebat and Enos let the two have their dinner and are secretly planning to eat them at midnight.

Pumbaa convinces Timon that the bats are going to eat them. When midnight arrives, Timon and Pumbaa try to escape the mansion, but run into various obstacles, including a wooden roller coaster which has one section of the track collapse.

After they escape, Timon and Pumbaa are outside, happy that they escaped the bats safely but then wonder how they got away. It is revealed that Timon and Pumbaa grew bat wings on their backs and are hanging upside down on a tree branch like bats do, indicating that they got at least bitten by the bats. The two then fly off, as Mr. Pirebat is heard laughing in the background. 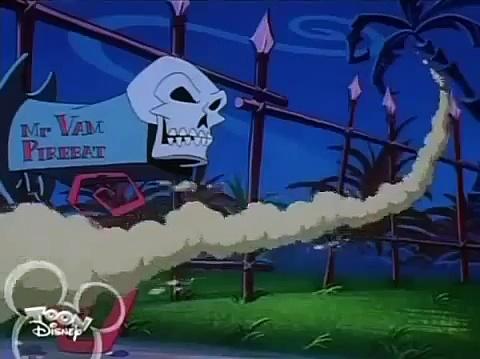 Retrieved from "https://lionking.fandom.com/wiki/Jamaica_Mistake%3F?oldid=296566"
Community content is available under CC-BY-SA unless otherwise noted.