"Jailhouse Shock" is the second segment of the thirty-first episode of Season 3 of The Lion King's Timon & Pumbaa. It aired on July 30, 1999, alongside "Guru-Some".

"Timon and Pumbaa end up in jail for eating June Bugs in July!"[1]

Timon and Pumbaa are enjoying their summer while eating their June Bugs. The two friends then get arrested for eating June Bugs in July. The police officer explains that it was illegal since a bird said so, making Timon and Pumbaa find Little Jimmy in their cell. Pumbaa, at first, finds this to be a coincidence, which Timon replies that they have been framed, reminding his friend about the last time they saw Little Jimmy.

While Timon fears about what Little Jimmy is going to do to them, Pumbaa points out that he can’t do anything painful to them since he’s only a bird in the cage, making them prepare to get tough on the bluebird. Little Jimmy then reveals to the duo that he is cell mates with Smolder. The bluebird convinces Smolder that Timon and Pumbaa were about to harm him, which the bear states that if they do so, he will harm them back, making Timon and Pumbaa try to figure out a way to get out of jail.

On their first attempt to escape, Timon bakes a cake with a pile in it to cut through the bars, ties some sheets together to climb over the wall, and leave jail with a getaway laundry cart. But Timon and Pumbaa run into Smolder and Little Jimmy, who are looking for the duo. When the pals hide in the cart before they see them, Smolder eats the cake. He tells Little Jimmy that Timon and Pumbaa are probably hiding somewhere, but he’ll eventually find them.

Pumbaa comes up with a better idea to escape, which is to get a law degree, file a paperwork, and then email it to the law for them to pardon the duo. Smolder and Little Jimmy enter the room Timon and Pumbaa are in. While the duo is hiding in a book, Smolder reminds Little Jimmy about the painful thing he will do to them at Little Jimmy's request. As they leave the room, Little Jimmy reveals that he is taking advantage of Smolder in order to get revenge on Timon and Pumbaa for turning him in.

When Timon and Pumbaa attempt to make a quick escape, they run into Smolder and Little Jimmy. They flee from them back into their cell, but get cornered by them. As Smolder prepares to hurt the duo, Pumbaa attempts to use his gas power to make them leave him and Timon alone, but it doesn't work, as Little Jimmy and Smolder have gas masks ready. 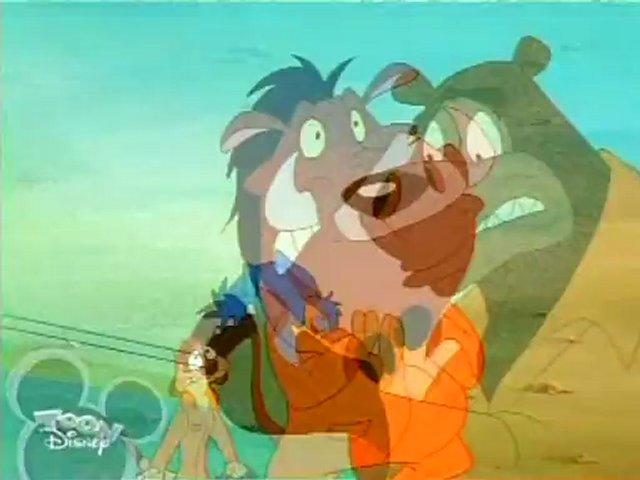