"It Runs Good" is the first segment of the thirty-seventh episode of Season 3 of The Lion King's Timon & Pumbaa. It aired on September 10, 1999, alongside "Hot Air Buffoons".

"While working as car salesmen, Timon and Pumbaa sell Smolder a lemon and try to keep it working."[1]

Timon and Pumbaa make a commercial about themselves working as car salesman. After Timon gives a hippo one of the used cars, Pumbaa sees that the car is falling apart and tells Timon that he promised not to sell anymore lemons (cars that don't work). Timon claims that the last car they're selling runs perfectly good.

While Timon counts his money under the shade, Pumbaa runs into Smolder, who asks the warthog for a car that runs good and states that he has been sold problem cars before and that he will get very angry if he ends up with another lemon. When Pumbaa sells Smolder the last car, telling him that it is in perfect working order according to Timon, Timon sees the bear trying to drive it. At this point, he confesses to Pumbaa that the car he sold Smolder is actually a lemon.

Timon and Pumbaa now have to make the car run good in order to keep Smolder happy. They do so by getting under the hood and run over the fan belt, resulting in Smolder being able to drive the car.

As Smolder continues to drive, he states that he better not feel a bump, otherwise he will hurt Timon and Pumbaa. When Timon and Pumbaa overhear Smolder's words, they realize that the car is getting a flat tire. So the two friends get out of the hood once again to each grab an axle.

Later, while Smolder continues to drive, rain is coming towards him and he decides to test the convertible top, which doesn't work either. Therefore, Timon and Pumbaa make themselves be the convertible top while the poor weather happens.

When everyone is about to arrive at the end of the road, Timon and Pumbaa throw everything in the hood overboard while Leslie's boyfriend chickens out by turning into an actual chicken and flying off, leaving Leslie alone with no driver. Therefore, Smolder jumps from his car to the one Leslie's in. Smolder's car stops at the end of the road, but when Timon throws out one more thing off the hood, the car starts to fall down while Timon and Pumbaa quickly get out. 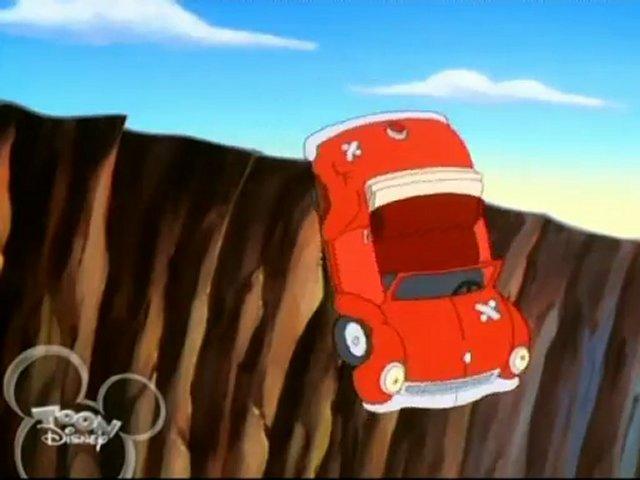